Makola fire: Fire officers had to rush to Circle and Kaneshie for water - Accra Mayor - MyJoyOnline.com

Makola fire: Fire officers had to rush to Circle and Kaneshie for water – Accra Mayor 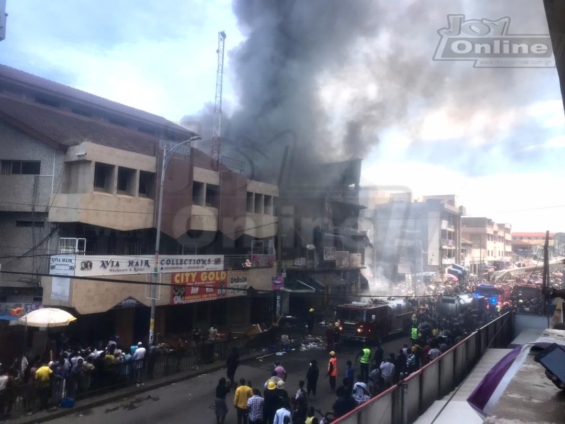 The Mayor of the Accra Metropolitan Assembly, Mohammed Nii Adjei Sowah says fire tenders deployed to douse the fire at Makola had to go as far as the Kwame Nkrumah interchange (Circle) and Kaneshie in search of water.

The fire on Monday morning ravaged portions of a three-storey building; destroying valuables running into millions of Ghana cedis.

Eyewitnesses who spoke to JoyNews blamed the late arrival of fire officers dispatched to the venue.

But speaking to JoyNews, the AMA boss explained that the unavailability of water accounted for the delay.

“They had to go far. They had to go to Circle, Kaneshie to fetch water and come back. We do have water hydrants but we don’t have enough water,” he stated.

“By 8 minutes, the water got finished. So you see them moving to and fro, to and fro to ensure that there is water.”

He also added that the Service has so far utilized water from as many as 8 fire tenders each containing 3,000 to 40000 gallons of water.