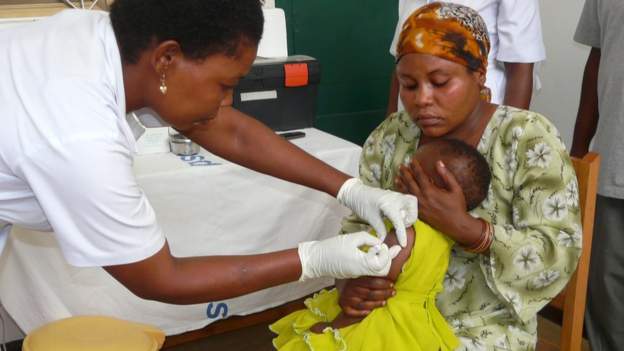 The vaccine has been through several rounds of testing

Malawi has begun a large-scale infant vaccination campaign against malaria which is the world’s first-ever campaign of its kind, World Health Organization (WHO) country representative Dr Neema Kimambo has said.

The health authorities are using the only vaccine against the disease to be recommended by the WHO.

The RTS,S vaccine, as it’s known, has been through rounds of testing in Malawi, Ghana and Kenya over the past few years.

In the most recent phase of testing, since 2019, the WHO has supported the vaccination of 360,000 children per year across the three countries.

Early trials showed that more than 30% of the 5-to-17-month-olds who received it were protected. This low level of efficacy has meant that some have questioned whether it is worth the cost.

The Bill & Melinda Gates Foundation, which backs vaccine development, is not directly supporting the roll out as it feels that other tools to fight malaria as well as other vaccines being tested may be a better use of funds, the development news website Devex has reported.

RTS,S, developed by pharmaceutical company GSK, has been more than three decades in the making.

While the vaccine has a relatively low level of effectiveness, it has raised hopes of saving some of the more than 400,000 people who die annually from the mosquito-borne disease, most of them children in Africa.

In 2020, more than four million people in Malawi caught malaria and out of those at least 2,500, most under the age of five, were confirmed to have died from the illness.

The country’s national malaria control programme manager Dr Michael Kayange told the BBC’s Focus on Africa programme that the vaccine should now prevent some of these deaths.

“We’re quite aware of its low efficacy… [but] in malaria control there is no single intervention that does it all. We’re not saying that the malaria vaccine has come to eliminate malaria but it’s one tool towards malaria elimination.”

Other measures include the distribution treated mosquito bed nets.

The vaccine will be administered through the regular immunisation programme which reaches all corners of the country.

Dr Kayange said this will ensure that all children under five, even in the remotest parts of the country, will be covered.

The roll out began in Malawi’s central region in the district of Mchinji. Eleven of the country’s 28 districts will be covered in the first part of the roll out and the authorities expect to vaccinate 330,000 children.

The vaccine needs to be given four times – once a month for three months and then a fourth dose 18 months later.

DISCLAIMER: The Views, Comments, Opinions, Contributions and Statements made by Readers and Contributors on this platform do not necessarily represent the views or policy of Multimedia Group Limited.
Tags:
Malaria vaccine
Malawi