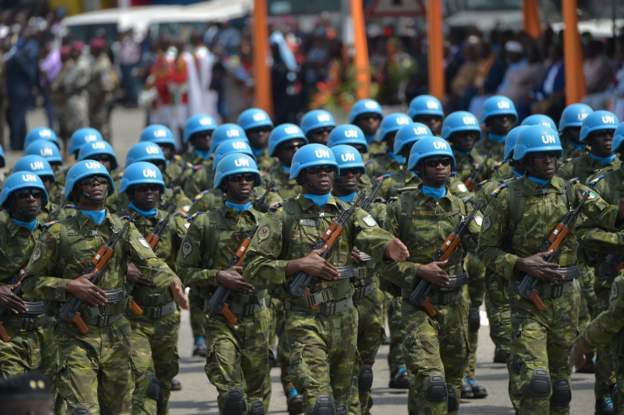 Ivorian soldiers are part of a peacekeeping force in Mali

Mali’s military ruler has said he is open to dialogue to resolve the issue of the 49 Ivorian soldiers who were arrested at the airport in Bamako earlier this month.

Col Assimi Goïta said he was willing, in a spirit of good relations between Mali and Ivory Coast, to work to resolve the dispute, including through diplomatic means.

He said this would be in strict compliance with Mali’s sovereignty.

An official statement on Monday said Col Goïta wished that Togo lead a mission between the two countries to help resolve the situation.

It came as he held talks on issues of common interest with Togolese Foreign Affairs Minister Robert Dussey. He praised Togo’s support and the personal commitment of Togolese President Faure Gnassingbé on Mali’s political transition.

Ivory Coast has been calling for the immediate release of its soldiers, who it says were unjustly arrested but who Mali said it considered as mercenaries.

Ivory Coast said its soldiers were in Mali to support the UN mission, known as Minusma, under an agreed contract between the two countries.