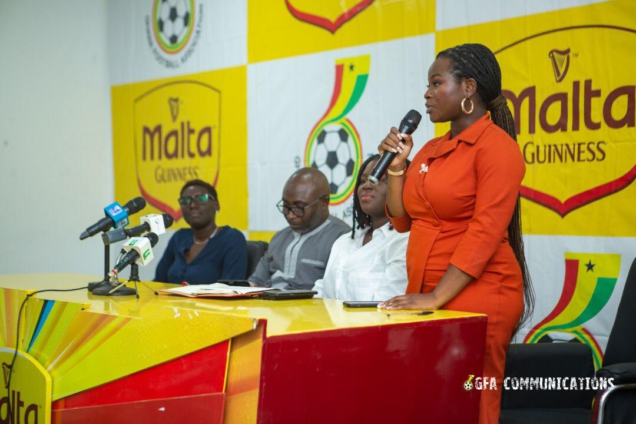 The headline sponsor of the Ghana Women’s Premier League, Malta Guinness, on Wednesday, January 25, 2023, held a press launch ahead of the restart of the league.

The league went on a break after matchday seven ahead of the 2022 FIFA World Cup but is set to resume over the weekend after all preparations have been completed.

As part of the build-up to the weekend games, the beverage brand organised a media engagement session where they talked about the progress made by the women’s league since the start of the 2022/23 season while also highlighting the need to support the women’s game.

“It gives me great pleasure to welcome you all back to the 2022/2023 season of the Malta Guinness Women’s Premier League (WPL),” the Marketing Manager of Malta Guinness, Dinah Adu-Asare, said during the event.

“As we begin the next phase of the league, we look forward to deepening and strengthening collaborations with you to make the Malta Guinness Women’s Premier League a success.

“As we watch the matches with thrill and excitement, let us be reminded of the values football teaches – fostering unity, community and igniting passion. Most importantly, let’s be reminded that women are capable of achieving far more than we have been made to believe,” she added.

Malta Guinness also awarded coaches and players from both the Northern Zone and Southern Zone for their stellar performances in the first phase of the season.

The award initiative is in fulfilment of their commitment to setting up a monthly award at the start of the partnership with the Ghana Football Association.

On the awards, Adu-Asare added, “We aim to inspire a world of good at all times as a business. We believe rewarding coaches and players of the Malta Guinness Premier League for their outstanding performance will go a long way to drive excellence. We remain confident that as we go into the second phase of the league, we will see more exciting play and results.”

The Women’s Premier League resumes on Friday across both zones. Ampem Darkoa and Hasaacas Ladies top the Northern and South zones respectively.

DISCLAIMER: The Views, Comments, Opinions, Contributions and Statements made by Readers and Contributors on this platform do not necessarily represent the views or policy of Multimedia Group Limited.
Tags:
Dinah Adu-Asare
Malta Guinness
Women's Premier League