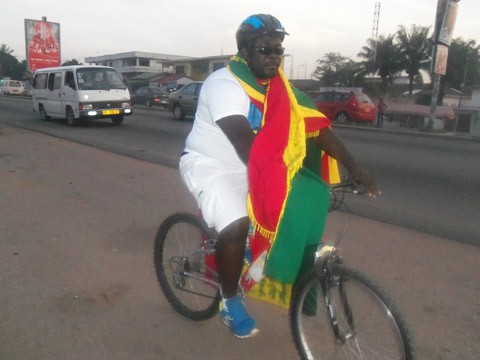 A 36-year old development manager is embarking on a nationwide tour on a bicycle to promote peace in Friday’s elections.

He has already been in the Ashanti, Eastern, Bono Ahafo and three Northern Regions and currently in Central region.

Patrons and other members of the public commit to peace by appending their signatures onto a big Ghana flag he carries along.

Mr. Gyan is looking to hand over the flag to President Mahama on the last day of his tour.

“We are going with the theme when peace is cheap, buy more. The reason why we are going on the ride is to actually talk about peace.

He says various initiatives to promote peace will be meaningless unless individuals subscribe to, and participate in them.

According to Mr. Gyan, there is no opportune time to talk and pray for peace than now.