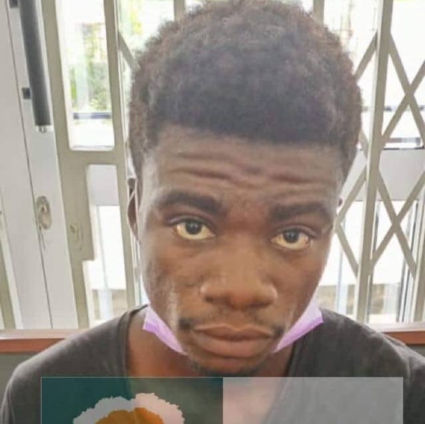 A 22-year-old man has been sentenced to 10 years imprisonment by the Kyebi Circuit Court for attempting to rob a student of her iPhone at Akyem Kukurantumi in the Eastern Region.

Charles Appiah was convicted on his plea when he appeared before the court.

The facts of the case are that, on February 5, 2022, at about 9:50 pm, the complainant, Solomon Boateng, 48, and his 17-year-old daughter, Dorcas Boateng with the help of some residents lodged a formal complaint at the Kukurantumi police station over an attempted robbery.

According to him, at about 9:30 pm on that day, his daughter who is a final-year student of Only Believe S.H.S in Kukurantumi went out from her hostel to buy water from a drinking spot behind the hostel.

On her way, the convict attacked her by spraying a pepper substance into her eyes and struggled to snatch from her an iPhone 7plus valued GH¢1,800.00.

He narrated that, during the struggle, the victim screamed for help after the convict bit her hand.

According to him some residents who heard the shouts rushed to the scene and arrested him.

They handed him over to the complainant who sent him to Kukurantumi Police station.

After investigations, police charged him with the offense of attempting to commit Robbery, contrary to sections 18(1) and 149 of Act 29/60.

The convict, Charles Appiah was put before the Kibi Circuit court where he pleaded guilty to the offence.

The court convicted him on his own plea on February, 10.

DISCLAIMER: The Views, Comments, Opinions, Contributions and Statements made by Readers and Contributors on this platform do not necessarily represent the views or policy of Multimedia Group Limited.
Tags:
Jail
Phone