Man struggling with dating apps advertises himself on roadside billboard 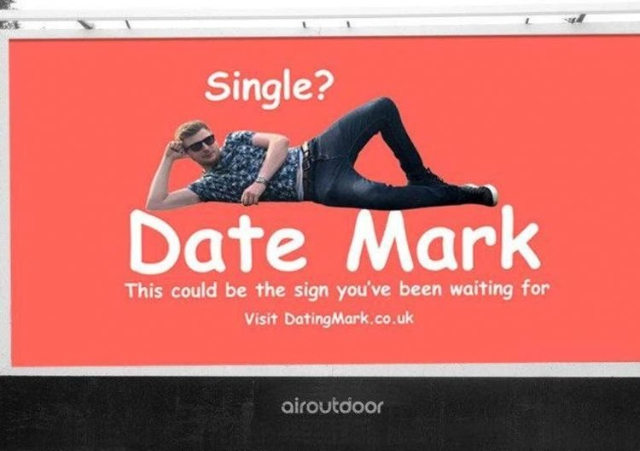 A 30-year-old from Sheffield recently made news headlines in the UK for spending £425 to rent a billboard on the side of a busy road in Manchester in hopes of finding a date.

Mark Rofe has been single for a year now, and using online dating apps hasn’t really made a difference, so after joking with a friend at a pub that he’d be better off advertising himself on a billboard, he realized that wouldn’t actually be a bad idea. So he set up a website featuring a witty biography where he invites female visitors to apply for a date with him. The billboard has been up for a few days now, but he has already been contacted by 100 people. Sadly, 50 of them have been men.

“I was talking to my mate saying how I was struggling on all these dating apps and I joked that I should put my face on a big billboard. We laughed about it but then actually I thought what a good idea,” Mark told the BBC. “Some people might think I’m mad paying £425 but if I find love then it’s fairly cheap. I tried to make it funny so hopefully I don’t come across as a desperate loser.”

By making it funny, Mark means he described himself as “extremely handsome and modest” in the biography on DatingMark.co.uk, and mentioning things like his index finger measures 6.82cm, and he has kissed more than three girls, in the “facts and stats” section of the website.

Mark says he turned to renting a billboard because online dating hasn’t really worked for him, and all his friends are either married or getting married.

The now famous billboard is located on Fairfield Street, in Manchester, and features a picture of Mark sitting on his side. The 30-year-old has yet to set a date, but he’s looking for another billboard closer to home, in Sheffield, to increase his chances.