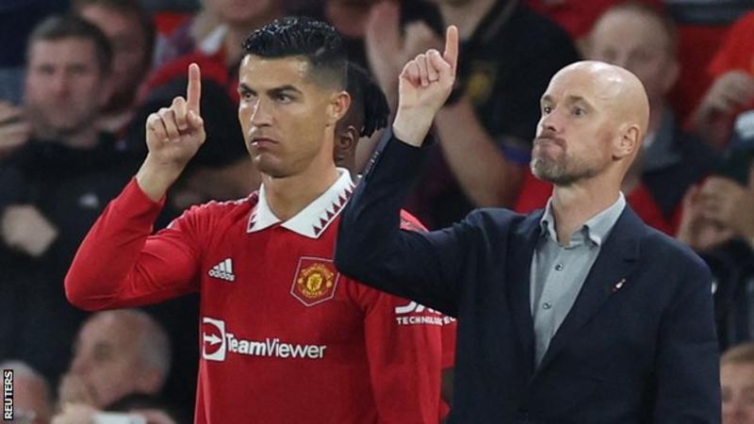 Manchester United boss Erik ten Hag says he and Cristiano Ronaldo are on “the same page” over the striker’s role at the club.

Portugal international Ronaldo, top scorer last season with 24 goals in all competitions, had wanted to leave United this summer.

But Ten Hag says the 37-year-old is committed to being at Old Trafford.

“We are happy with him, he’s happy to be here and we want to make the season a success together,” the manager added.

“From the start we said we planned with him. It’s your vision, not my vision.

One of the other questions surrounding Ronaldo in the team is where he will fit into the squad, to which Ten Hag said: “You can see in training that it is clear that he has the capabilities. He will fit in because… I don’t have to explain. Great player. He will fit in every system or every style.

“That’s why we are talking, I said we are on one page. He knows what the demands are.”

It comes after Ronaldo recently said he will soon reveal “the truth” about his future after reading so many “lies” this summer.

Ten Hag added the club will not buy anyone else before Thursday’s transfer deadline once the deals of Antony and Martin Dubravka are completed.

United have agreed an £81.3m deal to sign winger Antony from Ajax, while they are close to bringing in keeper Dubravka from Newcastle United.

“For this window, it will be the end,” said Ten Hag.

“You always have to be alert at a top club. But we will go from September to minimum January with this squad.”

He refused to speak about the arrival of Brazil international Antony as “the paperwork is not done so I cannot go too deep into that”.

However, he said that, in the attacking department “we need to strengthen our squad”.

“We have many games to cover – from now on we go in three games a week,” said Ten Hag.

“Especially from offensive players, they are quicker fatigued because they have to run more and run with higher intensity.

“We need numbers there, we need not just quantity but quality.”

The Ivorian spent last season on loan with Rangers.

DISCLAIMER: The Views, Comments, Opinions, Contributions and Statements made by Readers and Contributors on this platform do not necessarily represent the views or policy of Multimedia Group Limited.
Tags:
Cristiano Ronaldo