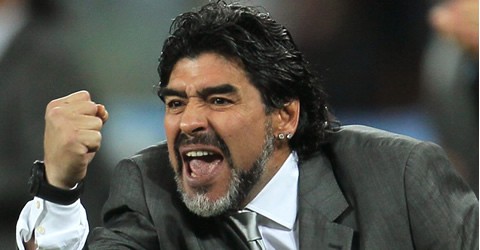 Football icon Diego Maradona made a star appearance at the Victoria International School of Sharjah (VISS), where he provided inspiration to hundreds of aspiring students.

The Argentinian legend toured the school before meeting with youngsters and conducting a mini-skills session. He also signed autographs and provided some insights into setting and achieving goals.

The special visit was part of Maradona’s role as an “Honorary Ambassador of Sports in Dubai” with the Dubai Sports Council and continued his passion for promoting sports and encouraging young talent to pursue their dreams.
“This was a unique opportunity for the school,” said Dr Roderick Crouch, Principal of VISS.

We were delighted to welcome one of football’s most recognisable figures who is one of the greatest football players of all time. He exemplified the beautiful in the beautiful game.”
“The children really connected with him and he was incredibly approachable and friendly. He encouraged the children to work hard and make the effort to be their best. It was sincere and inspiring.”

Maradona was given a hero’s welcome by the students. He visite classrooms as well as the extensive school’s sporting facilities, while the children also had photographs taken with their hero.

Maradona’s appearance follows recent visits from Mohammad Hammadi, the UAE’s medal-winning Paralympian at the London Olympics, and The Governor of Victoria, His Excellency the Honourable Alex Chernov AC QC.

The legend has recently been linked with a return to Al Wasl, who sacked him in the summer after only one year and replaced him with Bruno Metsu.
But the Frenchman stood down from his role on Friday due to his recent stomach cancer diagnosis.

There have also been recent reports linking Maradona with the vacant manager’s job at English Championship outfit Blackburn Rovers.