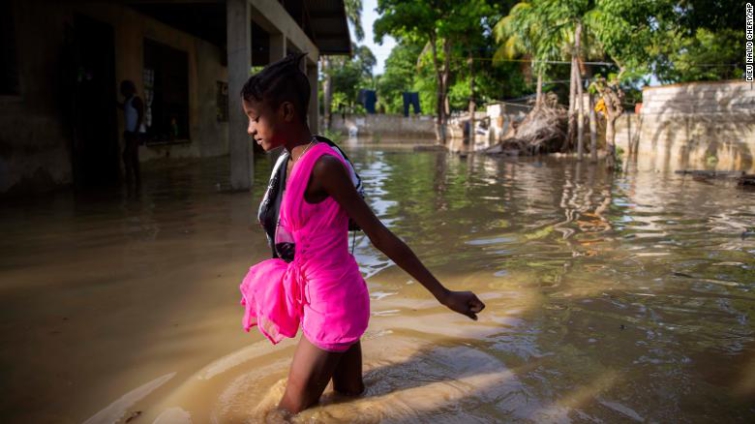 Just because Marco weakened to a tropical depression doesn’t mean the Big Easy can breathe a big sigh of relief.

Marco, which was downgraded from a Tropical Storm Monday night– could still bring heavy rain and localized flooding as it moves west, but no longer threatens tornadoes, said CNN meteorologist Michael Guy.

The tropical storm made landfall about 6 p.m. CDT near the mouth of the Mississippi River as a Tropical storm, the National Hurricane Center said.

Mandatory evacuations were issued for about 275,000 people in Texas and Louisiana as Marco and Laura head for the coast. https://t.co/KWA9I7ogRa

But still on track to strike the Gulf Coast this week is Tropical Storm Laura, which has already killed at least nine people in the Caribbean and is expected to become a hurricane before making landfall on the US mainland late Wednesday or early Thursday.

Laura could strengthen to a Category 3 hurricane — whipping winds of at least 111 mph — before it makes landfall, possibly on the Louisiana or Texas coast.

The National Hurricane Center on Monday afternoon issued a hurricane watch and a storm surge watch for parts of Texas and Louisiana, forecasting that water could rise 7-11 feet along portions of the coast.

Marco and Laura will deluge many of the same places

“Heavy rain will continue along portions of the north-central Gulf Coast tonight as Marco will quickly weaken to a tropical depression,” Ward said.

Tropical Storm #Marco has seen a decrease in winds, but that does NOT mean a decreased threat for rain. The next 3 days the Gulf Coast is going to see a tremendous amount of rain https://t.co/DRNzjUOrpR

Parts of the Gulf Coast could get at least 7 inches of rain.

“It’s also worth noting that a lot of the same locations that get rain from Marco will also get rain from Laura, too,” CNN meteorologist Allison Chinchar said.

Laura could dump torrential rain from eastern Texas to Mississippi.

“Even on Monday and Tuesday, Key West, Miami — you’re going to get some of those outer bands from Laura producing very heavy rain and very gusty winds,” Chinchar said.

If conditions are right for both Marco and Laura to strike land, the effects could strain power restoration or rescue efforts, since “there may not be much of a window” between the two storms, Louisiana Gov. John Bel Edwards said.

A mandatory evacuation order was ordered Monday night for Jefferson County, Texas, which includes the Beaumont and Port Arthur.

It goes into effect 6:30 a.m. local time Tuesday, according to the order from a county judge.

Mandatory evacuations were issued Sunday for Plaquemines Parish and Grand Isle in Louisiana.

The Red Cross has prepositioned relief supplies, and more than 400 disaster workers are standing by to provide emergency shelter, the organization said.

More than a dozen shelter teams are in Baton Rouge.”We urge people along the Gulf Coast to get ready now; listen to the advice of local officials and evacuate immediately if asked,” the Red Cross said in a statement.

“Make sure to include your pets as part of your emergency plan. Due to COVID-19, the Red Cross is unable to welcome pets into our shelters for everyone’s safety.

If you are evacuating with pets, please consider contacting the Red Rover organization: redrover.org.”

Laura claims the lives of a rescuer and a boy.

At least nine people have died in the Caribbean, including several in the Dominican Republic and Haiti, due to Laura.

The victims include a 7-year-old boy who died along with his mother after a wall collapsed in their home in the Dominican Republic.

Another person died after a tree fell on a house.

Five people were killed in Haiti, including a 10-year-old girl, the country’s civil protection agency said.

The US prepares for impact

As New Orleans prepared for the storms, Mayor LaToya Cantrell said the site of the Hard Rock Hotel, which collapsed during construction in October last year, remains a public safety risk because of the building’s instability, Cantrell said.

Three people died and dozens were injured during the collapse. It took some 10 months to recover two of the bodies because of the structure’s instability.

Long lines formed outside grocery stores in Louisiana as residents braced for both Marco and Laura.

Stacie Osborn said it took her 30 minutes just to get through the checkout line at a market in New Orleans.

“I stocked up on enough food for the week, extra water and gassed up my car just in case,” she said.John Snow in Baton Rouge said the line at his local Costco wrapped around the building just 10 minutes after opening.

If you’re thinking about making a quick run to Costco today, there won’t be anything quick about it. The store opened 10 min ago and there’s a line of literally hundreds already wrapped around the building. #TSMarco #TSLaura pic.twitter.com/gqjJFGMN4z

“It ended up taking about 20 to 25 minutes to get into the store, which wasn’t ideal with the Louisiana heat and masks on. But it wasn’t terrible,” he said.

“As always, we hope for the best but plan for the worst.”