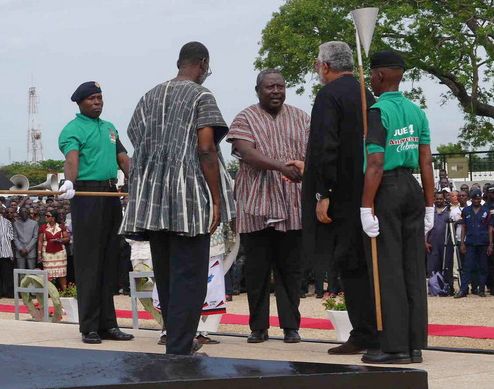 The economic mess, suffering and poverty into which the people of this country whom you loved so much and died for have been led into is worse than what led you to risk your life to save this country and give it a viable constitution that has lasted for three decades.

I feel vindicated in my assertion about you that:

“In the line of Ghanaian and African statesmen who have graced our political history in my adult life, none has rendered such incomparable service, not only to his country but to the Pan Africanist movement, the African liberation struggle, the African continent, in general, and the world at large. None has striven so mightily in the sincere defence of truth and justice, and none has done more to uphold the standards of our national honour free from greed and corruption. Sure! Jerry John Rawlings was a hard taskmaster, but he was tolerant and magnanimous. He was the sort of man who drew the best out of all his subordinates, each of whom was proud to serve him to the utmost capacity.”

Then came your exit on 12 November 2020, which was then followed suddenly by Arikpo joining you in January 2022. The balance of the critique will indeed be completed as promised.

The core and original members committed to your ideals of probity and accountability which underpinned the National Democratic Congress (NDC) you founded (including former Members of Parliament, former Ministers, and cadres of the revolution who served under you) have either been dismissed, suspended, ignored, or sidelined and the NDC has become a mirror image of the New Patriotic Party as property grabbing democracy.

The Constitution you birthed has now been reduced to an instrument of competition for political power to expropriate the wealth belonging to the masses and not for the welfare of citizens.

This is now done with the active participation of pretenders to your legacy using the machinery of the NDC for that purpose contrary to the ideals that informed the June 4 and 31 December Revolutions and formed the core values of the 1992 Constitution. The 2024 Elections could be lost just as you predicted for the 2020 Elections without a return to the original ideals of the NDC.

Unfolding events are proving that there is no President under the Fourth Republican Constitution that comes near you in merit or equal you in importance in contribution to the sustenance of democracy and the rule of law.

Comrade Rawlings, the motions of history are proving you to be one of those rare gems of this land who will never pass from the minds of men, but will live in their hearts, so long as Ghana endures because of the great qualities of your life.

This nation received great inspiration from your splendid courage, integrity, high moral character, and your matchless charisma and eloquence.

As long as some of us live, we shall uphold your works and deeds of transparency, probity, and accountability in the service of the people of Ghana whom you loved so much.

DISCLAIMER: The Views, Comments, Opinions, Contributions and Statements made by Readers and Contributors on this platform do not necessarily represent the views or policy of Multimedia Group Limited.
Tags:
Martin Amidu
Rawlings