Massive police deployment at Talensi ahead of by-election 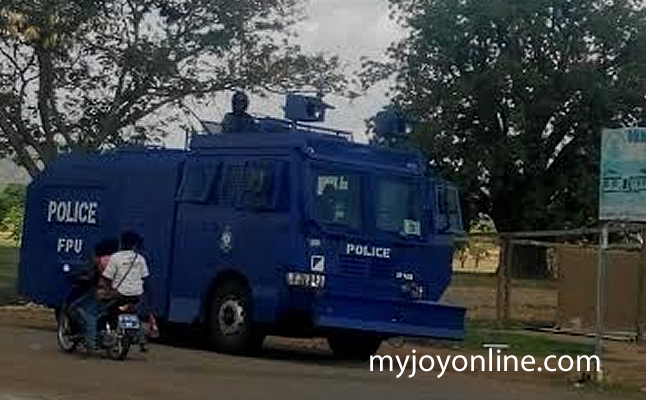 The Upper East Regional Police command has outlined an elaborate security plan with the deployment of armed officers and armoured vehicles ahead of Tuesday bye-election in Talensi.

Later today both the NPP and the NDC will be wrapping up their campaigns with two mammoth rallies in the constituency.

Police spokesperson ASP Thomas Agbanyo, told Joy News two armed policemen will be placed at each of the 74 polling stations in the constituency.

“And then in the 22 electoral areas, a senior [police] officer will man each electoral area. Apart from that patrol teams will be moving around the constituency to make sure that they maintain law and order,” he stated.

ASP Agbenyo added that two armoured vehicles are also on standby to respond to any rioting situation.

Joy News’ regional correspondent, Albert Sore reported things are calm as many people are in church.

He said the two main political parties, the NPP and NDC are mounting platforms in Winkogo and Tongo respectively for the last rallies later today.

The Talensi seat held by the NPP became vacant when the MP, Robert Mosore resigned after his enskinment as Paramount chief of Tongo.

The seat has traditionally been a safe NDC seat until John Akolgo Tia lost it to the NPP in the 2012 parliamentary elections.

John Tia, who had been the MP since 1992, obtained 9,000 votes whilst the NPP Mosore, who is the Paramount Chief for Tongo, polled 11,000 votes. A third candidate contesting on the ticket of the People's National Convention (PNC) pulled a surprise with 6,000 votes.

The seat is now being keenly contested not because of its numerical significance but because of the propaganda value.

If the NPP retains the seat as it is hoping to do, it will serve as a morale booster going into the 2016 presidential and parliamentary polls.

The governing NDC, on the other hand, is hoping to snatch the seat from the NDC in furtherance to its much-vaunted claims that it has performed exceedingly well.

Both parties are pouring a lot of energy and resources in the by-election purely because of this.

Wherever the chips fall, the usefulness of winning the seat may be limited to just the propaganda value, after all this is just one out of 275 constituencies – a win or loss may mean nothing at all for next year's polls which will certainly turn on a verdict on president John Mahama's performance.