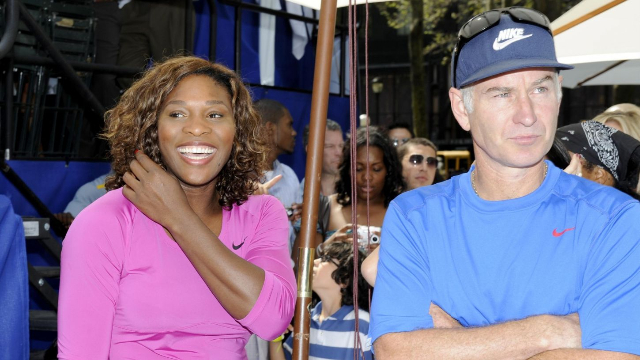 John McEnroe says his comments regarding Serena Williams were fair comment after suggesting she would be ranked 700 in the world in the men's game.

"That doesn't mean I don't think Serena is an incredible player. I do. And on a given day, Serena could beat some players… But if she had to just play the circuit — the men's circuit — that would be an entirely different story."

Speaking to CBS, Eurosport pundit McEnroe later expanded on his stance on the matter and added that he would like men and women to play each other to settle the debate.

"I felt the need, however unfortunately, to defend myself and say what I really felt, which is about what I think she would be," he said.

"I've got a solution. Solve the problem, and I'm sure the men would be all for this – the men and women play together. And then we don't have to guess."

Quizzed on whether he would like to apologise to Williams, McEnroe said:

The world number 701 Dmitry Tursunov, a 34-year-old from Russia who was once ranked as high as 20 in the world, has supported McEnroe's claims by adding that he believes he would beat Williams.

Outrage towards McEnroe for his Serena remark is absurd. Read the transcript. He was asked directly for a comparison pic.twitter.com/W9L97cXsXj

"I would hope that I would win against Serena," said Tursunov in an interview with the BBC. "It would be a similar argument to: who would run faster, the fastest woman or the fastest man? Tennis is becoming more and more a physical sport, so it's going to be hard for a woman to beat the men.

"It's not black and white. There are lots of factors to take into account. Physically I might not be in the best shape of my life, but as an overall package, I'm much better than my ranking would suggest. She is pregnant, and I'm not.

"I've never heard John say anything absolutely stupid. He knows his stuff. What he said about her being an incredible player is correct — explosive, powerful and she puts in a lot of work. But I would hope that I would win."

Former world number one Williams, who won the Australian Open in January while pregnant and since has taken time off to have her baby, responded on Twitter, saying:

Dear John, I adore and respect you but please please keep me out of your statements that are not factually based.

I've never played anyone ranked "there" nor do I have time. Respect me and my privacy as I'm trying to have a baby. Good day sir