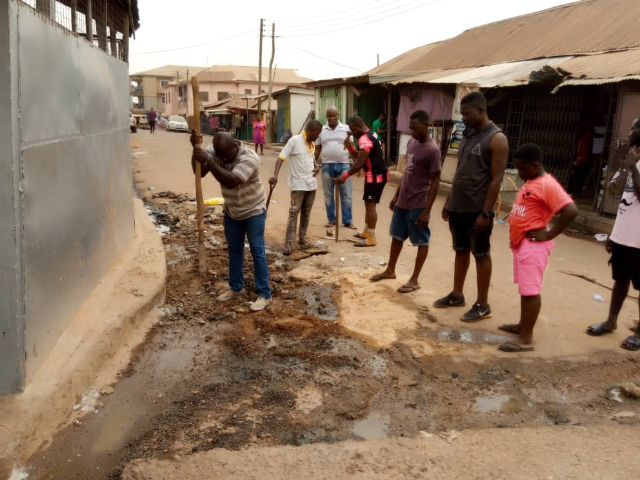 To a visitor, Ernest Okai is a man haunted by dirty choked drainage systems but to those who know him at Asafo, he is a wayfarer for proper sanitation system.

Okai seems to know first hand the anguish of not having a proper sanitation system. And now that he has won an assembly election, he is dedicating his life to a crisis many residents have suffered in silence.

Choked gutters are not just complications; they bring many problems that impact the lives of the people.

The buzzing sound of mosquitoes during the night and itchy bumps that appear after mosquitoes puncture your skin and feed on your blood, can jeopardise your bedtime.

The unbearable stench that travels within rooms through vents leave so much to desire.

The cause of the bad smell is mainly a result of clogged gutters, where mud and soil form, as well as decomposed leaves.

Okai together with his friends and residents use humour to fight against poor sanitation.

He stretches his hands in between walls of choked gutters to collect garbage and dirt while his supporting team does same at a different location to keep Asafo clean.

Few have gloves & Wellington boots on while many of them “gloveless” – they are just angry to empty the area of several days of dirt.

This is what Okai stood on to campaign for an election which was marred by allegations and several criticisms from his main contender.

He says, “I never looked on. I gave all I could with a pure heart and good intents.”

In 2015, Okai lost the election in his bid to lead the people. A contest that was described as highly competitive but his opponent won against the run of play.

Okai, however, pulled a surprise in last year’s election beating the incumbent and another brought a surprise to many within and outside the electoral area.

He secured over thousands of votes against the 600 plus and 412 by his closest challengers.

General sanitation was a part of his top priorities during the campaigning season. So the dedicated TV3 cameraman and Christian Service University-trained broadcast Journalist, would not allow that spirit to die now.

Working on a job that takes him across the country sparks the hunger to do something beyond just shooting and scribing.

“My work is to shoot and write but as an assemblymember, my people don’t need me to tell their story with the camera and mic,” He says.

Okai says he has to do the work himself to show others the way adding that he likes having the opportunity to improve people’s lives.

Asafo is known for its poor sanitation, where access to proper disposal systems is limited.

Okai speaks on how it feels to go back to his community to inspire them and help residents to redefine their destinies.

“I’m really, really excited every time I feel I contributed to moving people out of poor sanitation”.

One key thing that’s exciting to Okai is his being able to empower the residents with information and skills.

“Just providing them with inspirational words is a joy for me.”

He enjoys helping communities to see the link between health, sanitation and its impact on their education and their dignity.

Okai and his team embark on the exercise every fortnight. But there are challenges confronting Okai’s efforts.

“We need logistics like shovels, Wellington boots, wheelbarrows to take this exercise to another level” he laments.

Whichever way, Okai says, he couldn’t wait any longer to have a better time to get rid of garbage in the electoral area.

DISCLAIMER: The Views, Comments, Opinions, Contributions and Statements made by Readers and Contributors on this platform do not necessarily represent the views or policy of Multimedia Group Limited.
Tags:
Ernest Okai
Sanitation