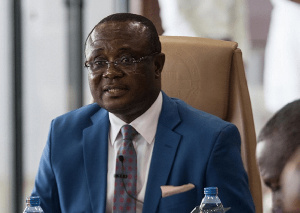 Chairman of Appointments Committee has said that Members of the Committee were exempted from the day-off designated for the national tree planting exercise.

According to him, “the Committee agreed to sit notwithstanding the said holiday,” adding that both sides of the House agreed to be present.

“Around 7:30 the Deputy Ranking Member of the committee called me as said that he has heard that we have decided to sit on Friday and I said yes , we must after the meeting and we all agreed to sit and he said the Minority Leader that is the Ranking Member told him that he had told me not to sit.

“And I said yes he has suggested that Mr Speaker has granted a holiday, therefore, we should not sit nut the Majority said no in his presence that we are exempted and the committee itself decided that we will sit,” he stressed.

The Bekwai MP said the meeting went on as scheduled and agreed and not done without the knowledge of the NDC MPs as claimed.

“It is not that a decision was taken behind them or that a date was fixed without their knowledge no. a date was originally published many weeks before we … and it was all agreed, all of us we negotiated at a zoom meeting like this that we agreed on the date and time that we will seat and we draw the programme and advertise them,” he explained.

He noted that the holiday was announced in the Chamber by the Speaker of Parliament of which the Committee and that the committee was not informed.

He added that the Minority Leader was the one who drew their attention to it saying “that the Speaker had told him in the morning but the committee agreed that notwithstanding the said holiday we will sit so it’s not anything done behind them no.”

This comes after the NDC MPs on Wednesday 23, 2021 staged a walkout during proceedings in Parliament to approve the four final batch of Deputy Ministers-designate.

The Minority argued that they could not participate in the approval because their members on the Appointments Committee were absent during the vetting of the nominees as they were undertaking a national duty of planting trees per the directive of the Speaker of Parliament.

DISCLAIMER: The Views, Comments, Opinions, Contributions and Statements made by Readers and Contributors on this platform do not necessarily represent the views or policy of Multimedia Group Limited.
Tags:
Appointments Committee
Joseph Osei-Owusu
Tree planting exercise