Message from the Morning Man: Frogs in a well 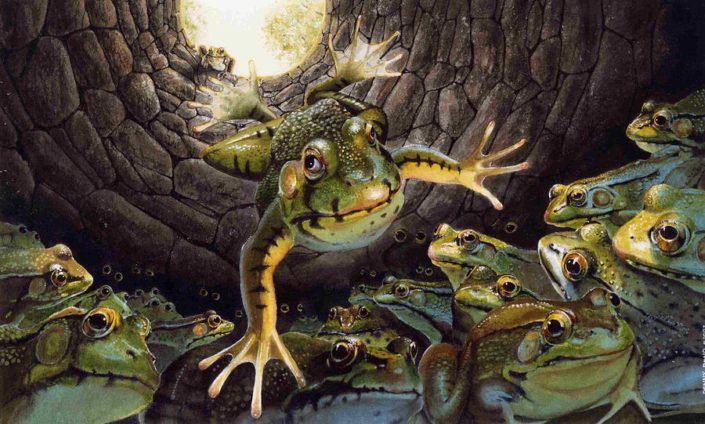 Two frogs fell into a well. As they struggled to hop out, their brothers, sisters and neighbours gathered around the mouth of the well.

Seeing how far down they had fallen, and realising how impossible it would be for them to leap high enough to clear the edge of the well, they all shouted down to the two frogs, telling them not to bother.

No use expending all that energy for a lost cause. If they just stayed put, they might live a bit longer at the bottom of the well.

One frog stopped trying and settled down to get used to his new and permanent environment. But the other just kept jumping. Over and over, trying to leap his way out of the well. The frogs at the top kept shouting down at him, “You’re wasting your time”, “no frog has ever jumped this high before”, and, “stop setting yourself up for disappointment”, and “This is just embarrassing. Stop kidding yourself. You’re not getting out”.

Finally, with one almighty leap, the little frog soared upwards and cleared the lip of the well. He was free. All the other frogs gathered around him, patted him on the back, and congratulated him on achieving the impossible. One of them asked, “So how come you didn’t stop when we were all advising you to?”.

The brave frog laughed, you were telling me to stop? Well, I have a hearing problem so I thought you were all cheering me on to keep jumping…”.

Now, I often tell my son this story to teach him how important it is to have a positive attitude, and to associate himself with positive people. But for us adults, there is yet another message hidden beneath the surface. The frog who kept trying succeed eventually managed to leap out of the well because each time, he tried harder than the last.

If you picture what it must have taken to actually taken for the little frog to actually exert more and more energy, put more and more effort into each leap, even as he got more and more tired and frustrated after every failed attempt, it becomes clear that getting out of that well took no less than a superhuman effort.

So the question is, are we all superhuman? Are we all capable of the superhuman feats of endurance required to surmount the imposing, intimidating, insurmountable obstacles in our way? Can we actually keep trying in the face of failure and rejection? Can we actually get up from a fall, and not only keep going, but push harder?

Be honest, you don’t find it so easy to say “yes” to that, do you? It sounds like a lot of hard work, doesn’t it? What kind of achievement do you have to kill yourself before you get it? Isn’t it better all round for everyone if we simply accept our lives as they are, without whatever lofty goal we’ve been breaking our backs pursuing?

Did you know that your hair will keep growing even after your death? Fascinating, isn’t it? I read it somewhere – can’t remember where exactly – and it’s stuck in my mind ever since. I thought it was quite an apt metaphor for infinite possibilities and the boundless potential for growth that we all have. The Americans tell their children that indefatigable cliché, “you could be whatever you want to be”. Their children hear this, believe it, and go ahead to become whatever they dream of. Their nation has become the land of opportunity simply because they believed it was.

My friends, there are two ways to approach a problem. Either by believing there is nothing you can do about it, or by believing you are the only one who can do something about it. That’s what the story of the two frogs demonstrates. Until he  made that final leap that got him out of the well, there was no difference between the positive thinking frog and the one who gave up.

Each time the leaping frog fell to the ground, he was in exactly the same situation as the one who gave up. They were both failures at the bottom of the well. The only times when he was superior was when he was in the air, and of course, when he made it out of the well.

In this world, the only difference between the successes and the failures is that the successes are always trying. So it’s time to make that decision that will change your life. Are you going to find yourself a nice, comfortable spot where you can sit quietly and watch the world flow down the river, carrying your dreams with it? Or are you going to keep jumping until you make it?

My name is Kojo Yankson, and each time I leap, I go higher. GOOD MORNING, GHANAFO!

DISCLAIMER: The Views, Comments, Opinions, Contributions and Statements made by Readers and Contributors on this platform do not necessarily represent the views or policy of Multimedia Group Limited.
Tags:
Frogs in a well
Kojo Yankson
Message from the Morning Man