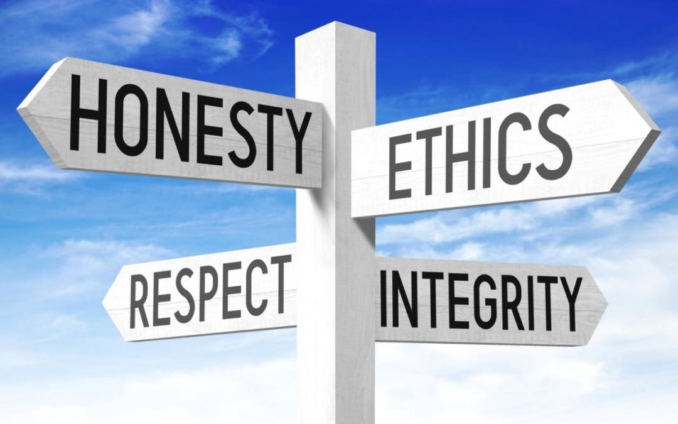 When I was little, my mother had a rule: if you did something wrong, but told the truth about it, you wouldn’t get into trouble.

So I kept my mouth shut about the stuff I did wrong. But my sister did the opposite. She would always own up whenever she was naughty, and my mother would always keep her word and let my sister off the hook with almost no punishment.

One day, when my mother was out, I nipped out to my friend’s house to watch movies, even though my mum had asked me to stay in and do my homework. I knew exactly when my mum would return form bible class, so I knew exactly what time to be home by. On my way home, I saw the local campus gossip drive past me.

As soon as I saw her car, I knew she would tell my mother the next day that I had been out. To leave me in no doubt that she had seen me, she stopped and asked me about my mother. I knew I was dead meat,so I decided to try out my Mum’s honesty policy and see if it got me off the hook.

As soon as she stepped through the door, I spilled my guts out, telling her how I had been bored, and decided to go to my friend’s house for a while before doing my homework. I finished off by saying I was sorry.

To my surprise, my mother went to the closet and took out the dreaded cane. That day, I got the thrashing of a lifetime. Later, when I was back in my Mother’s good books, I went up to her and asked, “So Mummy, why did I get caned me even though I owned up and was honest like you told us to be?”

She said, “Kojo, I met Auntie Emelia on my way home. She told me she’d seen you. So I knew you only owned up because you expected her to tell me. That’s not honesty, Kojo. That’s not what I’m trying to teach you. An honest man tells the truth not because he has to, but because he wants to.”

Today, people don’t tell the truth unless they absolutely have to.Actually, it’s more pervasive than that. We don’t admit the truth to each other about anything.

Bosses lie to their staff about company finances, religious leaders lie to their congregation about the scriptures, Governments lie to the people about the economy, doctors lie to patients, workmen lie to customers, the police lie, the press lie, chiefs lie, even Presidents lie.

And these days, it’s not just politicians who are able to stand in front of the world and utter barefaced falsehood – journalists are at it too! I mean how can two journalists go through the same experience and give two opposite accounts of it? How can one journalist say “I was slapped by National Security”, and then, with the same mouth, turn round and say “I was never touched by national security”? How can a journalist do this, knowing fully well that at least one of those statements is a barefaced lie? How? And more importantly, why? Because they can get away with it.

We all keep things from each other, and create this web of deceit between us that covers up reality and forces young people to grow up with absolutely no concept of what happens in the real world. All because we all seem to be set to lie by default until we are forced to tell the truth.

What my mother told me that day was the beginning of a certain enhancement of my understanding, which has gone a long way to shape who I am. Today, I am also teaching my son that telling the truth is not a strategy, but a way of life. We have been so separated from reality by this layer of lies that has grown so thick that it threatens to smother honesty and render it extinct in our society.

Not so long ago, a celebrity – a leader – a political aspirant seeking a position of public trust – decided to conceal the truth about how exposed he and his father had been to the Novel Coronavirus. This dishonesty put people’s lives in danger.

Those people include some of my colleagues here at Multimedia. An entire A&E unit was shut down and 20 of our much-needed frontline workers were quarantined because of these lies. Some of those people actually became sick of COVID-19.

As a society, we have done nothing to punish that person’s deadly dishonesty. Yet, when poor people venture out of their homes (Which is also wrong, by the way), we slap, cane and shoot them. There is a horrible hypocrisy here. And that is also dishonest.

So here’s the question: is it too late? Is honesty dead? Do we have what it takes to bring it back? Maybe, maybe not. Perhaps this question is too big for any one of us to answer. Which of us is wise enough to predict the future of humanity? Well, the good news is we don’t have to.

The destiny of the world is not in our hands. Only our own individual destinies. So let’s start with a personal choice. Let’s choose honesty. Not for our own good, because like I say often, it’s too late for many of us, but for those who are coming, those who are watching us, looking up to us for the examples they will follow for the rest of their lives, for their sakes, let’s show them what real honesty actually looks like.

Of course it will be difficult. Of course it will. But they’re worth it, so suck it up and stick it out. It’s not what you’re used to, so you’ll suffer a bit. There’ll be embarrassment, there’ll be criticism, there’ll be general discomfort, and even financial loss when you make this decision to always be honest. It will cost you, but it will benefit the world.

My name is Kojo Yankson, and honesty will only return to our society one person at a time, starting with you. So what are you going to do about it?