Message from the Morning Man: Irritation 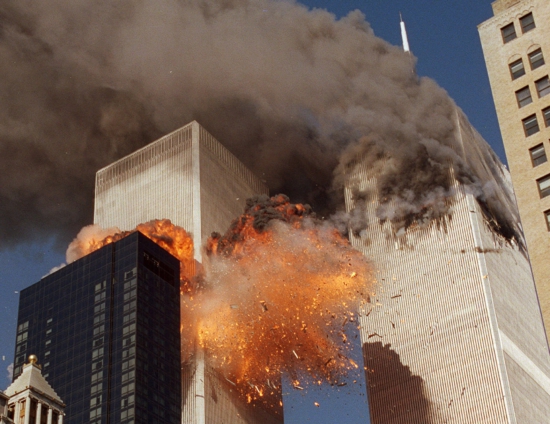 Smoke billows from one of the towers of the World Trade Center and flames and debris explode from the second tower, Tuesday, Sept. 11, 2001. Chao Soi Cheong, The Associated Press

Today, I will tell you seven stories. See if you can spot what they have in common.

Ben McCaffrey was very irritated. His wife had yelled at him that morning for not paying enough attention to their son. He made the cardinal mistake of talking back to her, and for his punishment, he was now forced to accompany his boy on the first day of kindergarten.

This was decidedly inconvenient for him, as it meant that he was going to miss an important board meeting with his company’s directors at 8:30 AM.

Hector Ramirez was very irritated. It was the wrong day to draw the short straw for the donut run. Yes, the donut shop was only a block away, but their office was on the 20th floor, and so it took a while to make the journey – time he could ill afford that day, because his quarterly report was due at 8:30 AM that morning.

The way things were going, he was likely to miss the deadline.

Mia Ginelli was very irritated. She had forgotten to change the batteries in her alarm clock, and had woken up late on the one day she couldn’t afford to be tardy.

As she rushed about the house frantically getting dressed, she forced herself to face the possibility that she might miss her 8:30 AM job interview slot.

Peter Okocha was very irritated. He watched in disbelief as, just thirty feet ahead of him, his bus pulled away from the bus stop without him on board. How could this happen? The bus that was always late was five minutes early today of all days. What rotten luck.

Now, how was he going to make time to swing by his stockbroker’s office for an 8:30 AM appointment before going to work?

Dennis Morgan was very irritated. He had walked eight blocks to the subway station before he noticed the egg stain in his shirt. There was no way he was going to take his Manager of the Year photo with egg on his shirt, so he had to walk back home and change -although that meant he would probably have to call the photographer and push back the 8:30 AM appointment.

Carl Markham was very irritated. His new shoes were causing him blisters, so he had to stop and buy some plaster. The long queue at the chemists meant he was going to be late to relieve the other security guard at 8:30 AM.

So I’m sure you’ve spotted these are all stories of irritated people who are about to miss their 8:30 AM deadlines and appointments. What I haven’t told you is that all of these 8:30 AM appointments were in the North Tower of the World Trade Centre on the 11th of September 2001. At exactly 8:45 am that morning, the first plane hit.

9/11 still remains the deadliest terrorist attack against the western world.

Every year, we remember and celebrate the lives of those who died that day, but we don’t always think of those who survived – those who narrowly escaped death, thanks to some minor irritation or the other that prevented them from being in the towers at the moment disaster struck.

My friends, when bad things happen, we often imagine ourselves to be facing the end of the world, but we do not realise just how much worse things could be. We don’t always see beyond the misfortunes of our daily irritations, but from today, I want us to start considering the major calamities we might be avoiding thanks to the minor inconveniences we may be enduring.

So next time you’re stuck in traffic, or the elevator doors close before you get in, or you have to turn back and answer the telephone, or the kids are wasting time getting dressed, or you can’t find the car keys, or every traffic light is catching you on the red, don’t shake your fist in rage at life’s irritations. Just remember that you’re exactly where God wants you to be: safe from much worse.

My name is Kojo Yankson, and when things happen that I don’t understand, they are often to save me from things I can’t withstand.