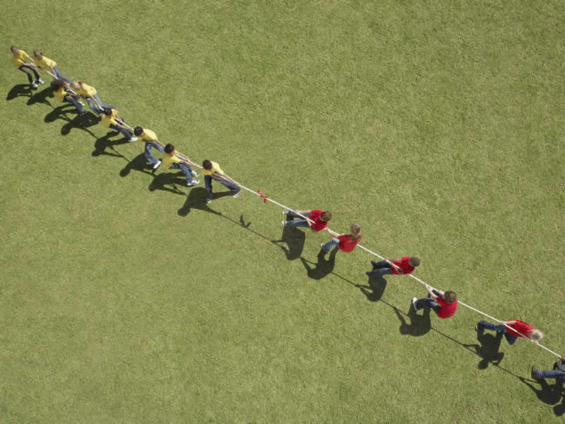 Yesterday, I told you about that rather interesting behavioural experiment conducted on the monkeys. Today, I want to tell you about another very revealing social psychology experiment, but this one was conducted on humans.

Muzafer Sherif and his wife Carolyn wanted to understand what caused conflict. So they conducted a social exercise which has now become famously known as the Robbers Cave Experiment. They selected 22 young boys. All of them were 12 years old, all were from white, middle-income families, with parents who were still married to each other. Then they randomly placed each of the 22 boys into one of two groups. None of these boys had ever met each other.

The two groups were transported separately to a big Scouts’ training compound called Robbers Cave. For three days, neither group was aware of the other’s existence. Those first three days were spent engaging each group in team-bonding exercises. Rowing, camping, singing, things that they had to work on together in order to succeed. This fostered a strong team dynamic and a sense of belonging. One team picked a name for their team – the Rattlers – and wrote it on their T-shirts and on their bags and property. The other team named themselves the Eagles and made a flag to symbolise their team. Each team was eventually made aware of the existence of the other team, and the fact that they were also using the same facilities.

On the third day, Sherif introduced the teams to each other by causing them to both to turn up at the canteen at the same time. He then made them draw straws to decide which of them would eat first. This introduced competition into the dynamic. Competition for scarce resources. And competition sowed the seed of hostility. Each group saw themselves as the ones with the sole right to all the facilities because they thought they got there first. To each, the other group was “abusing” the facilities while they were putting them to good use.

Over the next few days, the two teams were constantly pitched against each other in competitive games with attractive prizes like trophies, favourite meals, uniforms, switchblades, flashlights and so forth. The teams competed in a tug-of-war, baseball, swimming, tent pitching, with the winning team sweeping all the prizes and the losing team going away with nothing.

Over the next few days, the competition was increased and the hostility grew with it. Name-calling escalated to nasty proportions, and each team developed an automatic mistrust for their opponents. They mounted surveillance on each other and took every opportunity to report their opponents to the authorities for every infraction they uncovered. Individual team members were willing to undertake increasingly risky activities if it would negatively affect their opponents. The Eagles planted their flag on the playing field and warned the Rattlers not to remove it. The rattlers burnt the flag. Then the Eagles ransacked and vandalised the Rattlers’ dormitories. Things continued to escalate over this second stage until the two teams had to be physically restrained from attacking each other.

Friends, I don’t know about you, but this all sounds very familiar to me. When it comes to Politics, Ghanaians become more divided than ever. The party lines are drawn, each develops a strong sense of entitlement to power, name-calling escalates, foot-soldiers take risks to destabilise the competition, and everyone develops this attitude that there can’t be anything good about a person who would choose to belong to an opposing party. People become territorial, laying claim to the allegiance of all voters in a particular area or ethnic group… they vandalise each other’s property and generally work against each other with the hope of securing that most scarce and most valuable of prizes – power. Basically, when it comes to politics, Ghana is Robbers Cave.

This is really sad because in our bid to win power Ghana becomes the battleground.

Now, let me tell you how the Sherifs and their team ended that experiment. They created a blockage in the pipe from the water tank, and, after they had both become exceedingly thirsty, the scientists gave each team clues that helped them identify the fault. Both teams converged on the pipe and started shouting suggestions of how to remove the blockage. Eventually, they worked together to get it out, and all cheered and rejoiced together once the water started flowing again.

Friends, we’re in yet another election year, and I understand the tension that comes with political parties’ efforts to win power, but this is our country – our Ghana, so our nation’s peace, stability and development must be a far more pressing goal than political power, which can only be temporary. However much you love and respect your presidential candidate, he can only be president for a maximum of eight years. Then someone else will come along for you to idolise.

The one thing that will remain after all this is our country, Ghana. So let’s not let competition for a temporary prize sow the seed of permanent hostility amongst us. Let’s reset the priority and identify the more pressing need, which is NOT your party – it’s Ghana.

No matter what we might disagree on, the one thing we all want is for Ghana to be better. So let’s not get sidetracked by a competition whose winners will only benefit temporarily. The survival and growth of our nation benefit us all, not just one party. So is that not a better goal to strive for? We were born on the same team, people. Any other division we create is temporary and artificial. Remember, when you look at your fellow Ghanaian and you see an enemy, we all lose.

My name is Kojo Yankson, and I’m Team Ghana for life. Which team are you?