Message from the Morning Man: Rope-A-Dope 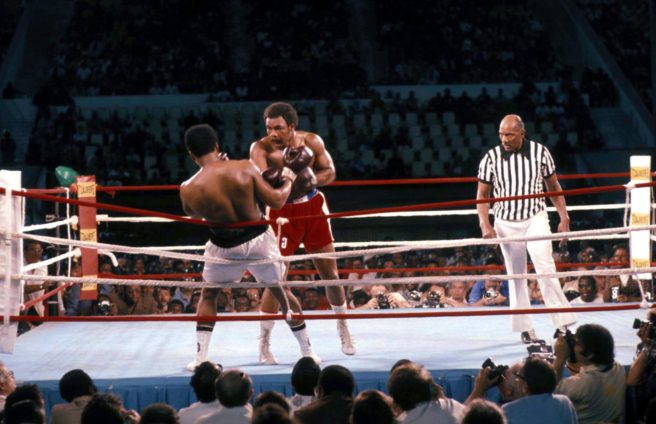 The Rumble in the Jungle, with George Foreman, was the biggest fight of Ali’s career. Foreman had already beaten every other contender for the heavyweight title. Not just beaten them – decimated them. The much-feared Joe Frazier, who had knocked Ali down in one bout and lost on points in another, had been knocked out in the second round by George Foreman.

Foreman’s punches were… something else. They were deadly. They crushed bones and dislocated jaws. He was big, tall, imposing and absolutely terrifying in the ring – not the fun, affable, grill-selling gentle giant that we know and love today – no. Foreman was the stuff of nightmares.

Ali was 32 years old. He was older, slower than his best form. Nobody expected him to win against the big, scary Foreman. Ali’s long-time supporters were all tipping him to be knocked out. But Ali was still Ali – taunting and jeering at Foreman, saying,  “If you think the world was surprised when Nixon resigned, wait ’til I whup Foreman’s behind!”

It was in the run-up to this same Foreman fight that Ali delivered his famous rhyme,  “I’ve done something new for this fight. I done wrestled with an alligator, I done tussled with a whale; handcuffed lightning, thrown thunder in jail; only last week, I murdered a rock, injured a stone, hospitalized a brick; I’m so mean I make medicine sick.”

However hard Foreman’s punches were, he couldn’t keep punching forever. Boxing is hard work. Foreman would be more tired in each round than the last. All Ali had to do was last longer than Foreman. Simple.

But Ali was scared. One punch from Foreman could end it all. How could he walk into that ring and face such pain? Ali pictured those blows. He imagined them raining on his head, his ribs, his chest, his arms. He imagined Foreman’s uppercut connecting with his jaw. He imagined a combination of heavy haymakers crashing into his brows and splitting his face open. He imagined being hit again and again and again. And once he had pictured the beating, he no longer feared it.

My friends, the fear of the unknown can cripple us. Sometimes the only way to overcome your fears is to vividly picture them, to face them mentally. Imagine losing. Imagine failing. What would happen? Would you die? What’s the worst that would happen to you? Once you have actually imagined yourself going through it, you find that it’s not as scary as you thought. The unknown becomes known. That’s what Ali did before he walked into the ring to face his toughest opponent yet.

The fight started promisingly, with Ali landing a few powerful punches to Foreman’s head. And then… he stopped fighting. Literally. For the next six rounds, Ali hardly threw a single punch. He just lay back on the ropes and took Foreman’s punches. Blow after blow after blow. He just kept his guard up, rested on the ropes and took a beating. Not just any beating. A George Foreman beating.

Foreman on the other hand had come into the fight with a different mindset. He knew he had beaten boxers who had beaten Ali. He knew Ali was old. He had quietly sat through all the taunting and jeering from Ali, simply waiting for the moment when the loquacious Louisville lad would set foot in the ring, so he could knock his head off.

So when after seven rounds of pummelling, Ali grabbed him and whispered, “is that all you got, George” into his ear, Foreman suddenly realised that this was not the fight he had prepared for. He was being introduced to the now famous rope-a-dope.

In the eighth round, Muhammad Ali knocked out George Foreman. The bigger, stronger, faster, younger opponent was knocked out by a champion who decided that he would withstand the pain and absorb the punches of his adversary. Friends, my message to you is simple.

Victory is not guaranteed to the strongest or the fastest. Victory belongs to the one who lasts longest. So today, I want you to close your eyes and picture your worst fears in graphic detail. then open your eyes, step into the ring and stay up until they go down.

My name is Kojo Yankson, and almost every hardship can be surmounted. For those that can’t , there’s the Rope-a-dope.