Message from the Morning Man: The King is Naked 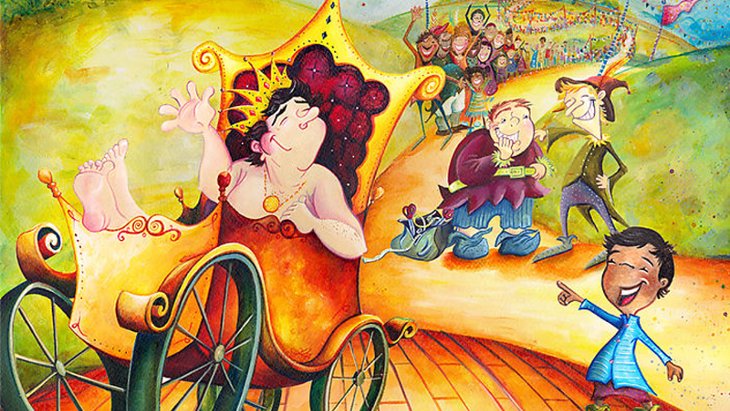 I remember the first time I read The Emperor’s New Clothes. I remember closing the book afterwards and feeling particularly annoyed at the character of the little boy who shouted out that the king was naked. To me, the little brat was such a spoilsport, ruining the fun for everyone who was secretly laughing at the Emperor’s nakedness behind his back. Of course, I was only six years old at the time, and my moral compass had not yet evolved  to the point where I could understand the extreme importance of the boy’s character in the story…

Come to think of it, I didn’t really understand the boy’s role until fairly recently, and with that moment of epiphany comes the realisation that many adults still don’t understand what the boy really represents in the story. So let’s talk about that.

First, for those of you who don’t know the story, it’s about an emperor who was extremely vain, always buying clothes, until two swindlers came to him and promised to make him the most amazingly fine, the most divinely magical garment he’d ever seen. This garment was so magical that only the wise could see it.

So after taking his money for weeks, the swindlers finally announced the garment was ready. So the king came into the room, and couldn’t see anything in the swindlers’ hands, but dared not admit it, because that would mean he was not wise. So he put on a brave face, climbed into his invisible garments and went on a parade throughout the main streets of his kingdom. Again, nobody could see the clothes. All they could see was their naked emperor, but all were too scared to admit that he was not wearing any clothes, because nobody wanted to be accused of being unwise. So they laughed behind his back instead.

Until a little boy with nothing to lose shouted, “The King is Naked!”, and suddenly, everyone felt able to speak the unspeakable. The laughter that ensued was to the bitter embarrassment of the Emperor, and he, along with all readers were left with a strong lesson about the dangers of vanity.

But for me, there was another lesson, which was represented by the little boy. You see, as a people, we share a fear that is often more prohibitive, more pathological, more paralytic than the fear of flying, the fear of snakes, or even the fear of death, and that is the fear of feedback.

We hate being wrong. We cannot bear other people’s negative opinions of our works, or words. It’s as if we consider it some sort of curse to be wrong. When people tell us what they don’t like about the things we do or say, our first instinct is to defend ourselves – to explain our choices. Our aim is not to understand our critics, but to get our critics to understand us. These days, I am beginning to understand more and more what utter folly this is.

I recently read a quote that really made me think: “… it’s not about what we produce, it’s about what is consumed”. My friends, this is true about every single thing we do. It applies to every profession, every product, every word we ever say or write. Whatever we produce has no meaning if it is not consumed. So the opinion that matters the most is the opinion of your consumer.

Have you ever caught yourself in an argument on social media because someone has misunderstood your comment? Have you ever caught yourself trying to defend your actions to a client or a customer? Well, here’s the truth, and it’s simple: If they think you didn’t do it right, then you didn’t, because the fact that they didn’t enjoy consuming it as well as you expected means that you didn’t produce it as well as you thought.

Now, what if the complainant is in the minority? After all, you can’t please everyone, right? Well think about it this way: Let’s assume 90% of your consumers like what you do. What does that mean? Does it mean you can’t do better? Have you done your best work? Is this the best you will ever do for the rest of your life? No? Ok, then how do you plan to improve? What new ideas will you get from those who like your old product? It’s those who thought it wasn’t that great who can tell you how to improve it.

The simple rule is, if your words or actions or output was perfect, then everyone would have loved it, and everyone would have understood it. If you ever catch yourself having to explain your work to anyone, you must immediately accept that you could have done it better. And that is a good thing.

Negative feedback is an opportunity. It is the key to cracking the code of your improvement. Political parties in Ghana have their captive audience who think they are God’s gift to mankind, but to win an election, they have to convince those who don’t yet think they are the best. The same applies to you. It doesn’t matter how annoying the feedback may be, take it seriously, because you need it to improve.

Don’t automatically jump into defence mode when someone objects to what you’ve done or said. Listen carefully to what they have to say, and thank them for giving you the opportunity to do better. Instead of wasting time trying to get them to understand you, spend that time trying to understand them, because those that don’t like what you do are the ones who will make you do it better.

My name is Kojo Yankson, and your feedback makes me better.

DISCLAIMER: The Views, Comments, Opinions, Contributions and Statements made by Readers and Contributors on this platform do not necessarily represent the views or policy of Multimedia Group Limited.
Tags:
Feedback
Kojo Yankson