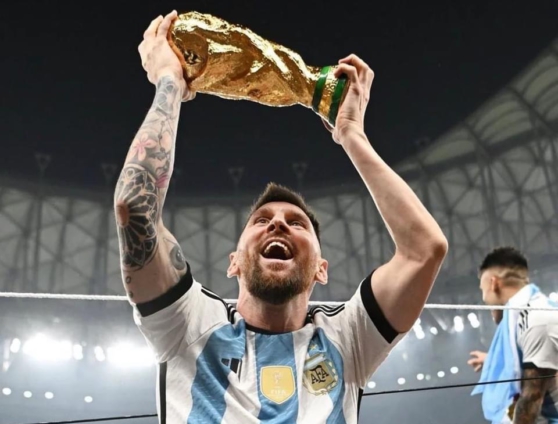 By winning the World Cup on Sunday, many fans believe Lionel Messi has settled the GOAT debate between him and Cristiano Ronaldo.

And on the social media front, the 35-year-old has outdone his rival – who has more than 500 million followers – with his latest Instagram post, too.

Soon after becoming a world champion, Messi shared an image of him holding the World Cup trophy during Argentina’s celebrations.

“CHAMPIONS OF THE WORLD!!!!!!!,” he posted. “So many times I dreamed it, so much I wanted it that I still don’t fall, I can’t believe it…… Thank you so much to my family, to all who support me and also to all who believed in us.

“We prove once again that Argentinians when we fight together and united we are able to achieve what we aim.

“The merit is of this group, which is above individuals, is the strength of all fighting for the same dream that was also the one of all Argentinians… We did it!!! LET’S GO ARGENTINA DAMN!!!!!We’re seeing each other very soon.”

The picture, as of Tuesday morning, has received more than 55 million likes on Instagram, which is now the most for a sportsperson on the site.

It has surpassed Ronaldo’s post of the duo sitting together at a chessboard for a collaboration with Louis Vuitton ahead of the World Cup, which stands at almost 42 million likes.

However, Messi’s is still not Instagram’s most successful ever post.

World record egg currently holds the title with 56 million likes, but Messi could find himself topping the charts very soon.

Messi played a captain’s role in Argentina’s win over France on Sunday, the South Americans’ third World Cup title and first in 36 years.

Messi scored twice, while Kylian Mbappe netted a hat-trick as the two sides drew 3-3 in extra time to send it to penalties.

Argentina would go on to score all four of their spot-kicks, stealing the crown from the reigning champions, who missed two of theirs.

Messi posted another Instagram picture with him holding the World Cup on Monday afternoon as he travelled back to Argentina on a plane with the Jules Rimet trophy.

DISCLAIMER: The Views, Comments, Opinions, Contributions and Statements made by Readers and Contributors on this platform do not necessarily represent the views or policy of Multimedia Group Limited.
Tags:
Christiano Ronaldo
Instagram
Messi