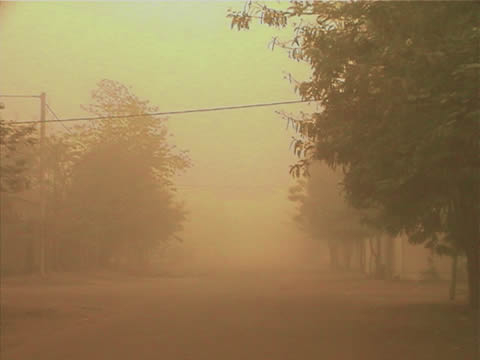 The Ghana Meteorological Agency (GMA) has predicted that, the intense Harmattan conditions prevailing in Ghana will reduce, by the end of next week with an improved visibility.

In an interview with the Daily Graphic on Thursday, the Director of Research and Applied Meteorology at the GMA, Charles Kweku Yorke, says there is a probability that there will be an improvement in the current hazy conditions.

“The south western winds blown from the Gulf of Guinea would help in the reduction of the intensity of the Harmattan.

The country is currently engulfed in north-eastern winds, which blow from the Saharan Desert.

During this period, most people experience dryness of the skin and the throat. Some experience cracks on the lips and feet while the dust also settles on buildings, rooms, structures and various items, including vehicles.

Driving also becomes difficult because of the hazy weather conditions.

The values were recorded at 9 a.m. on Thursday.

He advised drivers to be careful while plying the roads because of the harmattan conditions, coupled with fog and mist patches which were predominantly high in the mornings.

“Visibility is drastically poor in the mornings; hence, if drivers are not mindful, they could run into stationary vehicles ahead,” he said.

For the Aviation industry, Mr. Yorke, said there are no recorded cases of flights being grounded as a result of poor visibility as witnessed last year.

He said when visibility reduced to a certain level it affected flights in the country.

“It becomes very difficult to land and also take off as visibility is very poor, leading to passengers becoming stranded,” the director said.

He, therefore, advised the Ghana Civil Aviation Authority to pay heed to advice by his outfit to ensure safety.