Migrant caravan heading to US: What is it and why does it matter? 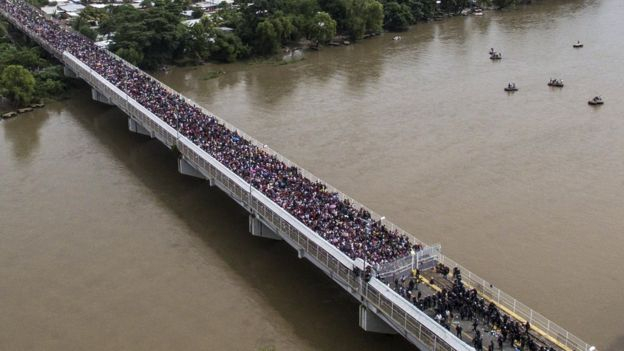 For more than a week, thousands of migrants from Central America have been trudging north towards the US.

They say they are fleeing persecution, poverty and violence in their home countries of Guatemala, Honduras and El Salvador.

The journey poses a host of dangers, such as dehydration and criminal gangs, but many of the migrants say they feel safer travelling in numbers.

Here's what you need to know about the latest, and largest, migrant caravan.

How did it begin?

On 12 October, in the crime-ridden Honduran city of San Pedro Sula, a group of 160 people gathered at a bus terminal and prepared to set off on the dangerous journey.

They had been planning the trek for more than a month, in an attempt to escape unemployment and the threat of violence in their home country. 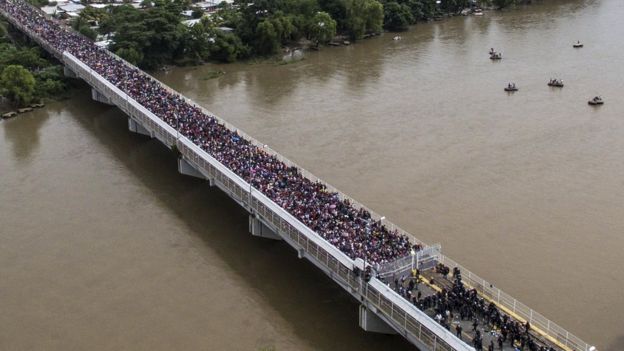 Most previous migrant caravans have numbered a few hundred people, but after a former politician posted about the plan on Facebook, news of it quickly spread and the numbers swelled.

By the time the group set off in the early hours of 13 October, more than 1,000 Hondurans had joined.

They have since crossed into neighbouring Guatemala and then Mexico, with thousands more people joining along the way. 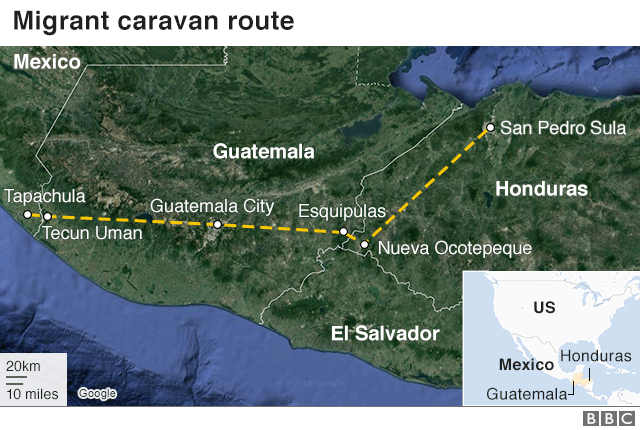 Why did they form a caravan?

Most of the migrants say they are seeking a new life and better opportunities in the US or Mexico.

Others say they are fleeing violence in their home country and intend to apply for asylum.

Honduras, which has a population of about nine million, has endemic problems with gang violence, drug wars and corruption. The wider region has one of the highest murder rates in the world. 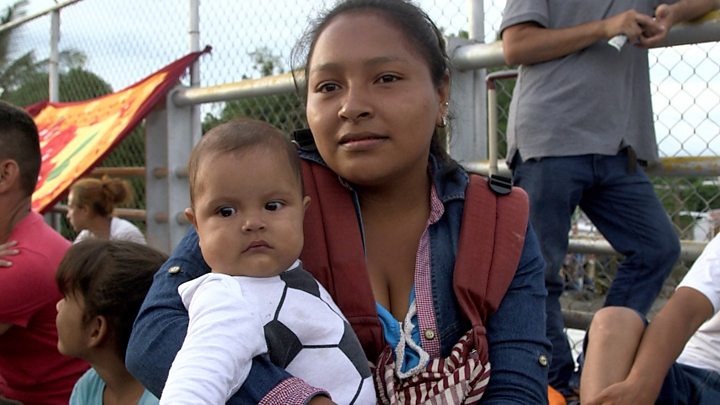 "It's our dream to reach the United States, we want to give our children a better future and here [in Honduras] we can't find work," one mother of two told local newspaper El Heraldo.

While Central Americans have long fled their homelands for the US and have sometimes joined forces along the way, the organised nature of these caravans is relatively new.

Migrants are often kidnapped by people traffickers and drugs gangs who force them to work for them. A large group such as this one is harder to target and therefore offers more protection.

How big is the group?

It is hard to say exactly, but the caravan has grown rapidly in size as it has moved north.

A spokesman for the United Nations said more than 7,000 people had joined the group as of 22 October, citing estimates from the International Organisation for Migration.

But the group has split up, meaning it is difficult to determine the exact number. 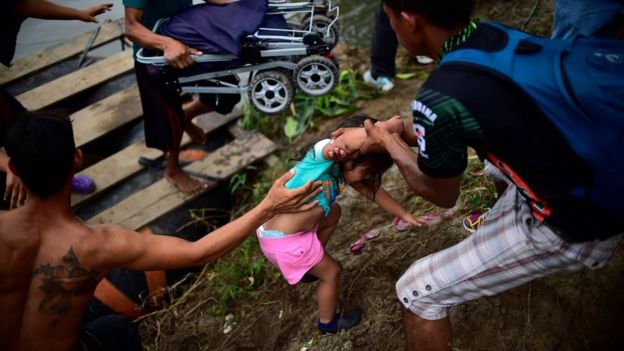 Some migrants have already reached the Mexican city of Tapachula, while others are still at the Guatemala-Mexico border.

Separately, a newly formed group of 1,000 mainly Honduran migrants has set off for the US.

But more than 3,000 Hondurans have turned back.

The journey is gruelling and poses a number of challenges for those who decide to join the caravan.

The hot weather means sunburn and dehydration are a constant risk, and some of the migrants have attempted to protect themselves with umbrellas and pieces of cardboard.

A number of people have fainted during the journey after walking for six consecutive days. 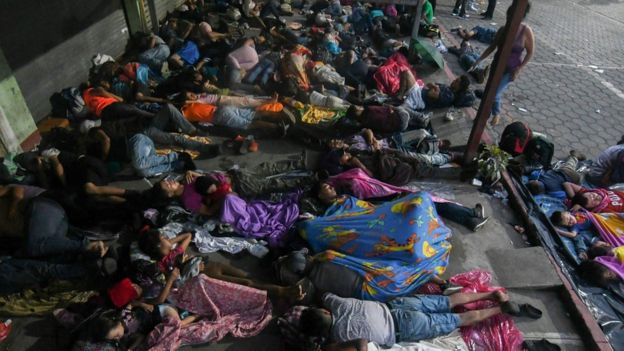 The migrants have been sleeping on the streets or in makeshift camps and there is a lack of clean water and sanitation.

Food is also in short supply, and local people have reportedly been providing the convoy with some food as it passes through.

At the border between Guatemala and Mexico, where migrants faced long waits as border officials checked their documents, there were clashes with police as tempers flared. 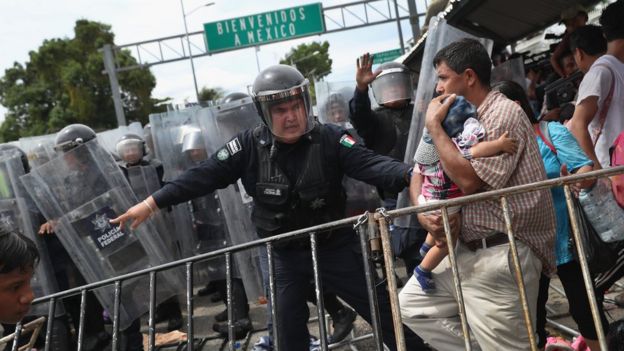 What happens if they reach the US?

There is a legal obligation to hear asylum claims from migrants who have arrived in the US if they say they fear violence in their home countries.

US Attorney General Jeff Sessions says the "credible fear" asylum rule has been exploited in the past, and announced in June that victims of domestic abuse and gang violence would no longer generally qualify under it.

This "Turn-back Policy" is currently subject to a lawsuit from the Southern Poverty Law Center, which accuses immigration officials of unlawfully delaying access to the asylum process.

Why are we hearing so much about this caravan?

Media captionTrump and the facts about the migrant caravan

Unlike previous smaller convoys of migrants, this one has drawn the attention of US President Donald Trump.

On Monday, he criticised a number of Central American countries for allowing people to leave the region and come "illegally" to the US.

Mr Trump also threatened to cut off foreign aid to these countries, but he has not specified what money will be cut and it is unclear how he would do so. 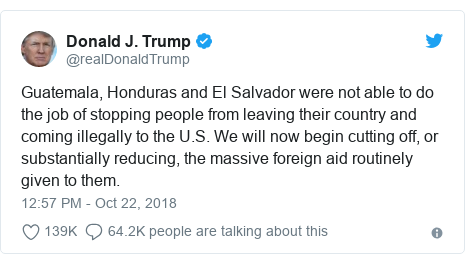 Curbing illegal immigration was one of the main campaign promises Mr Trump made when he ran for president.

His Republican Party is facing mid-term elections on 6 November and could be unseated by Democrats in the House of Representatives.

Without offering evidence, Mr Trump has repeatedly suggested the caravan is politically motivated.

On Monday he urged people to blame Democrats for the border crisis, saying: "Remember the mid-terms."

He also tweeted that the caravan contained "criminals and unknown Middle Easterners". When he was later pressed by journalists on what this meant, he offered no origin for the claim but invited reporters to investigate for themselves.