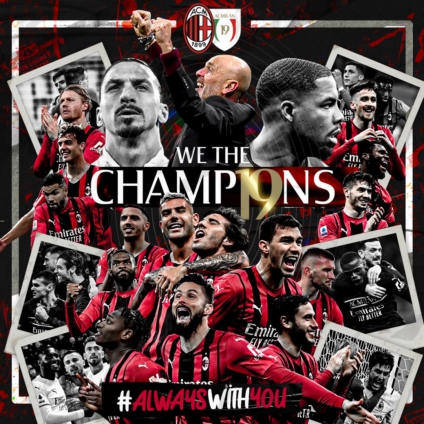 AC Milan won their 19th Serie A title but the first for 11 years by cruising to victory at Sassuolo.

Rossoneri fans were initially unhappy at Stefano Pioli’s appointment in 2019 given he previously managed rivals Inter, but he has masterminded this two-point success over his former club.

Olivier Giroud scored twice and Franck Kessie once as Milan won easily away.

Inter beat Sampdoria 3-0 on the final day but Simone Inzaghi’s men could not deny their city rivals.

Napoli were third after a 3-0 win at Spezia while Juventus ended their disappointing season under Massimiliano Allegri – who won the title with Milan in 2010-11 – by finishing fourth but qualifying for next season’s Champions League.

Milan have suffered more than a decade of disappointment since the title for Allegri in 2011 but Italian Pioli has brought back the glory days.

Former Serie A players such as Clarence Seedorf, Filippo Inzaghi, Sinisa Mihajlovic, Vincenzo Montella and Gennaro Gattuso have all since tried and failed to revive the former European champions.

Veteran striker Zlatan Ibrahimovic was part of that last Milan side that won Serie A and at the age of 40 he lifted the trophy with the club for a second time.

By winning the title, midfielder Daniel Maldini follows in the footsteps of his father Paolo Maldini, who won seven league titles with Milan, and grandfather Cesare Maldini with four.