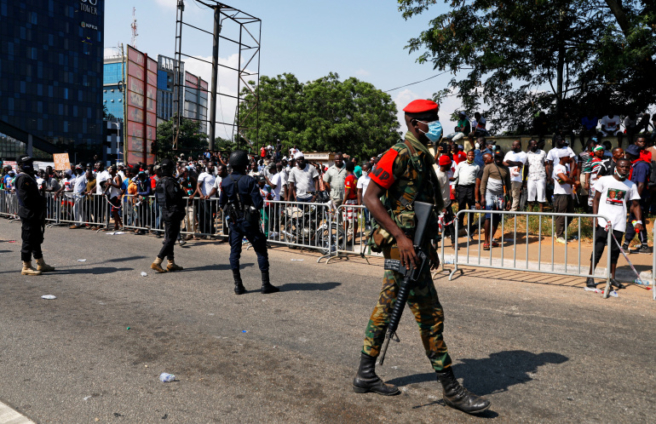 Security forces stand as supporters of the opposition party, the National Democratic Congress (NDC), protest outside Ghana's Electoral Commission ahead of the official declaration of election results in Accra, Ghana December 9, 2020. REUTERS/Francis Kokoroko

Deputy Chair of the Electoral Commission (EC), Dr Bossman Asare, has denied a claim by former President John Mahama about the intervention and influence by the military in the declaration of the 2020 election results.

Speaking at a press conference held at the electoral commission’s headquarters on Monday, Dr Asare proclaimed that the election results declared by the EC were similar to the results announced by the media houses, hence the military had no influence in declaring the results.

According to the deputy EC chair, allegations about military influence in declaration of the 2020 election results are untrue and false.

“Ladies and gentlemen, the former president has also alleged that the military influenced the declaration and announcement of the election results, this is also false.

“It never happened. Nowhere did the military influence the declaration of the election results. It is not true.

The media and other observers also picked their data right from the ground and the collation centers and the results were no different from what the EC declared.

“It is important to note that all the major networks collated their own results and it was the same as what the EC declared,” Dr. Asare emphasized.

Dr Bossman Asare called on Ghanaians to ignore the claim by the former president and demanded that John Mahama provides factual evidence to his allegations.

“We call on the good people of Ghana to disregard the allegation of military influencing the declaration and announcement of the election results by the former president as it is false and untrue.

In the interest of democracy, we call on the former president to provide evidence of where the influence by the military occurred,” he said.

The press conference was to address issues of security, electoral violence, contestation of results, the election petition hearing, among others.