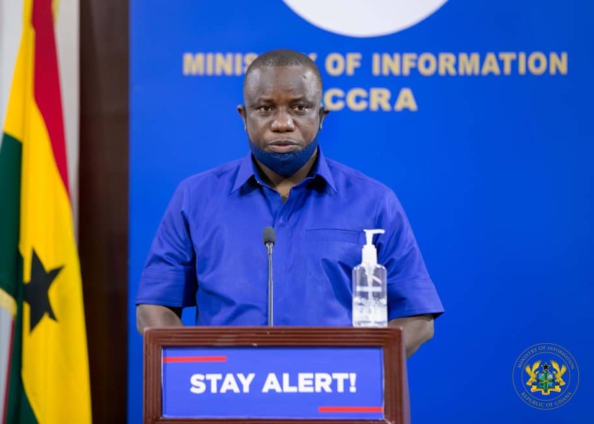 The Defense Minister, Dominic Nitiwul has revealed that some chiefs and locals in areas where illegal mining is prevalent are fighting back the military deployed to check illegal mining activities.

Speaking at a press conference, he said that many of these people do not know the impact of their illegal activities on the water bodies and their implications.

Mr Nitiwul revealed that some of the people including the miners help hide some of the heavy mining equipment used for the illegal activity.

“This is a national exercise, our water bodies are being destroyed, in the next five years if nothing is done to preserve these water bodies, people will not get water to drink, in fact, Ghana water will not be able to manage and give you clean water, it is in your interest that these things are cleaned.”

Citing an example, the Defense Minister revealed that a chief at Kyekyewere had sent some youth after about 400 soldiers who had taken shelter in a school after the day’s work.

The chief according to Mr Nitiwul had had two of his excavators burnt thus wanted the military out of his town.

“The nation has sent its troops to go and do this exercise, and you think that the soldiers have no right to sleep in a classroom in your town, because you claim two of your excavators were burnt on the river body? I think that people like this must be answerable to their communities and their people.”

This comes after the Ministry of Lands and Natural Resources sent some military troops to various forest reserves and illegal mining sites to put a stop to the incessant activities that are destroying natural reserves.

Their immediate mission is to get rid of mining activities on river bodies in the country.

To ensure that mining on water bodies in Ghana is immediately stopped, an operation dubbed ‘Operation Halt’ begun last month following a directive by President Akufo-Addo to the Ghana Armed Forces.

In the standard mineral right agreement, a holder is prohibited from conducting any operations in a sacred area. For this to happen, the written consent of the sector minister is required to conduct operations within 100 meters of any forest, river, stream, reservoir or dam etc.

Operation Halt began on the Pra River and is expected to continue to all parts of the country. In phase one, government said two Chinese nationals were arrested with nine excavators destroyed.

Mr Nitiwul, at the press briefing, disclosed that 28 escalators have been seized and destroyed in phase two of operation.

The Defense Minister called for support from the general public to help clean the water bodies to ensure water bodies are protected.

He explained that the general public will suffer in the next few years if the illegal mining activities are not checked.

He stated that although there are some resistance, some youths have proved they are in support of the government decision to embark on its operation.

“It is in your interest to clean up this rivers, for you to at least have good water, how can you explain to kids you are giving birth to today that this is the water you have for them to drink?”

DISCLAIMER: The Views, Comments, Opinions, Contributions and Statements made by Readers and Contributors on this platform do not necessarily represent the views or policy of Multimedia Group Limited.
Tags:
Defense minister
Dominic Nitiwul
Galamsey
Illegal mining