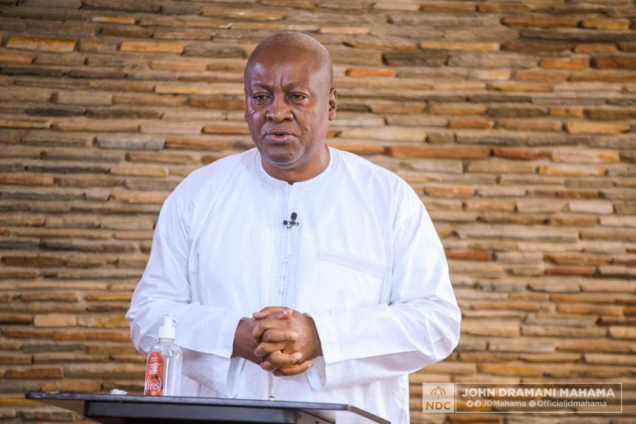 Former President John Mahama is elated that the World Health Organisation has approved the new malaria vaccine, RTS,S or Mosquirix, for widespread use.

In a post on Facebook, Thursday, he stated that millions of African children will be saved from avoidable deaths as a result of this scientific and Public Health breakthrough.

He also applauded Ghana’s Technical Working Group and the governments of Malawi and Kenya for aiding in a successful approval of the new malaria vaccine.

The former President stated that it is refreshing and promising to learn that Ghana’s active participation in the Malaria vaccine pilot programme has led to the approval of the vaccine to be deployed in Sub-Saharan Africa and other malaria-endemic regions.

John Mahama added that “as Dr Tedros Adhanom Ghebreyesus, the Director-General of the WHO, said, this is, ‘a historic moment’.”

World Health Organisation announced on October 6, that it has approved the vaccine.

Following recommendations by WHO to introduce the vaccine on pilot basis, a team of scientists from; school of Public Health at the University of Ghana, University of Allied Sciences, Noguchi Memorial Institute for Medical Research, Kwame Nkrumah University of Science and Technology evaluated the Vaccine implementation exercise.

The scientists however advised that the vaccine does not replace existing malaria control interventions.

Health authorities have stressed this is a new weapon in the fight against malaria to be used alongside other preventative measures, such as treated bed nets and drugs that target the malaria parasite.

“This is a historic moment. The long-awaited malaria vaccine for children is a breakthrough for science, child health and malaria control,” the WHO Director-General Dr Tedros Adhanom Ghebreyesus said. “Using this vaccine in addition to existing tools to prevent malaria could save tens of thousands of young lives each year.”

Ghana is one of three African countries, alongside Kenya and Malawi that is carrying out the Malaria Vaccine Implementation Programme (MVIP).

It is supported by the WHO in collaboration with partners, including PATH, a nonprofit organization, and GSK, the vaccine manufacturer.

DISCLAIMER: The Views, Comments, Opinions, Contributions and Statements made by Readers and Contributors on this platform do not necessarily represent the views or policy of Multimedia Group Limited.
Tags:
John Mahama
Malaria vaccine
Mosquirix
World Health Organisation