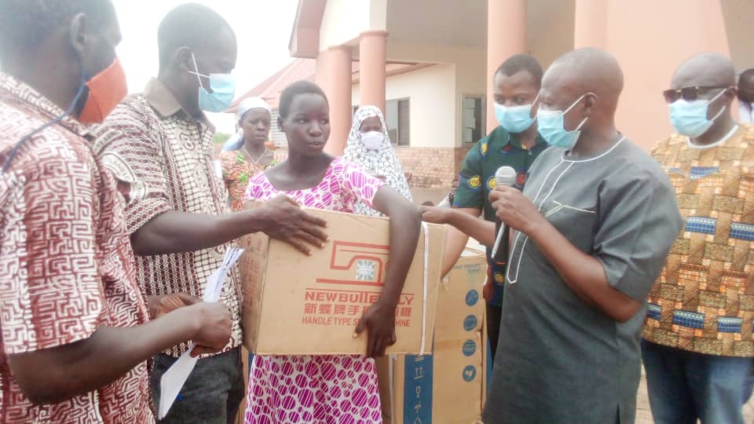 About 110 persons living with disabilities in the Mion District of the Northern Region have received support to the tune of ¢69,760.00.

The support which is from the disability fund is to empower PWDs with income generation ventures. The items included fridges, sewing machines, and hairdryers.

The rest were small ruminants for rearing, startup capital, wheelchairs, and among others. This is to help PWDs earn a decent living and also stop them from begging on the streets.

Speaking at a short ceremony in Mion to hand over the items to the beneficiaries the District Chief Executive for Mion Abdullah Mohammed Hashim said Ghana cannot have a holistic national development agender while leaving behind a group of the population who are at a disadvantage because of one form of impairment.

He said the New Patriotic Party government led by President Nana Akufo Addo believes in creating equal opportunities and value addition to the lives of people.

He said the assembly is committed to safeguarding the judicious use of the PWD fund in a manner that will inure to a long-term benefit for the beneficiaries.

Mr. Hashim noted that the approach by the assembly to assist PWDs to acquire capital-based assets and start-up capitals to start various entrepreneurial activities of their choices is largely commendable.

The DCE indicated that a careful engagement and assessment was done on the selection of the beneficiaries.

Mr. Hashim commended the Department of Social Welfare and Community Development, the Disability Fund Management Committee, Association of PWDs in the district for their hard work.

He urged beneficiaries to make good use of the items received to turn their lives around. The DCE also noted that the Assembly through the welfare department will continue to monitor and assist beneficiaries to ensure that they succeed in their various businesses.

The Vice-Chairman of the PWDs association in the Mion District David Nmayee said the support has contributed immensely to the welfare of its members.

He called on the assembly to ensure that more people are covered. He said some PWDs in some electoral areas have not benefited since the inception of the program and called for fairness in the distribution.

Some beneficiaries expressed their gratitude to the assembly especially the welfare department and the disability fund management committee. They pledged to put the items received into intended use.

DISCLAIMER: The Views, Comments, Opinions, Contributions and Statements made by Readers and Contributors on this platform do not necessarily represent the views or policy of Multimedia Group Limited.
Tags:
Mion District
Northern region
PWDs