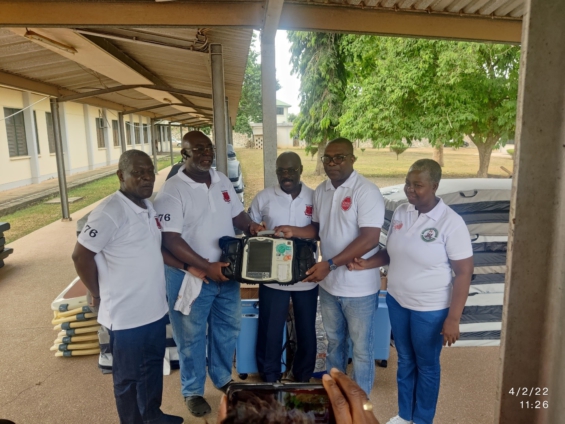 Second from left Mr K B Coleman, President of the year group presenting a defibrillator to Dr Ngyedu, CEO of the Hospital. Also in the picture are Mr Eric Koranteng (!st left) Dr. Ken Appah-Sampong (middle) and Mrs. Blankson, (first right) and some of the items presented in the background.

The group said they could not make the presentation in September last year due to the Covid-19 pandemic.

They, therefore, chose April 2, a day before the School’s Founders Day Celebration on April 3, to present the items.

Speaking at the function, the President of the Year Group, Mr K. B. Coleman, stated that the presentation was being made as part of activities commemorating 50-years of entering their great alma mater, Mfantsipim School.

He added that every 10 years, the Old Boys of Mfantsipim undertake a project for the School.

Mr Coleman said members of the group felt for this year’s celebration, they should give something back to the community that hosted them for five years and, in some cases, seven years.

After consultations with stakeholders, they chose the Cape Coast Teaching Hospital as the ideal recipient for the donation.

The two gentlemen residing in the United States of America played pivotal roles in procuring the items.

He acknowledged the effort of all members of the group who assisted in numerous ways; financially, network, and encouragement that made the donation possible.

Responding, the Chief Executive Officer of the Institution, Dr Eric Ngyedu, indicated that the presentation was timely as the hospital had to retool and equip it to meet the requirements of a tertiary Hospital.

Dr Ngyedu stated that there were many challenges, and he was happy that the 1976 Year Group had responded to some of them.

He hoped they could partner with the Year Group for other projects.

A member of the Year Group, and CEO of Ghana Gas, Dr Ben Asante, offered assistance to the hospital.

He said the assistance is part of their Corporate Social Responsibility goals, and such had already been given to Korle Bu, Akomfo Anokye, and others.

The vote of thanks on behalf of the hospital was rendered by the Director of Nursing, Sophia Blankson.

The items were dedicated to God by Rev. William Obuobisa, a member of the Year Group.