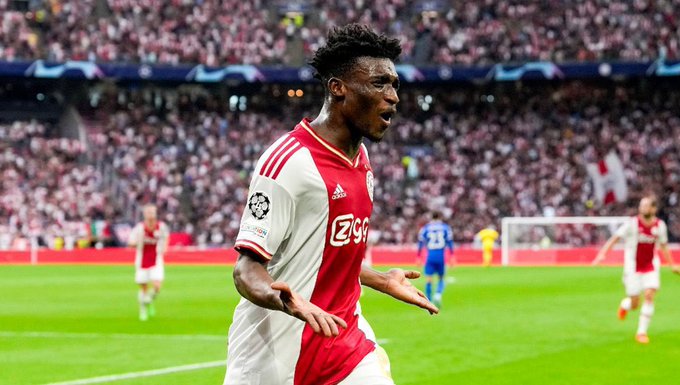 Black Stars midfielder, Mohammed Kudus, was in scintillating form for Ajax in their UEFA Champions League opener against Rangers.

Kudus was named in the starting line-up for the first time since April, slotting in ahead of Brian Brobbey for the game.

The Ghanaian settled in as a false 9 in Wednesday’s encounter at the Johan Cruijff Arena in Amsterdam.

The 22-year-old set up Steven Berghuis in the 32nd minute with a beautiful piece of skill to extend Ajax’s lead to two goals after Edson Alvarez headed in the opening goal of the game.

A minute later, the attacking midfielder was on the scoresheet after surging into the box having beaten James Tavernier in a sideline tussle.

Kudus then netted after letting fly his strike inside the 18-yard box to give Ajax a 3-0 lead going into the first half break.

The goal was also the Ghanaians first in the European competition.

Prior to the game against Rangers, Kudus had just played 74 minutes of league action for Ajax in the Eredivisie, with a chunk of it coming in last weekend’s win over Cambuur.

The midfielder came off the bench to score in that fixture prompting Schreuder to start him in the encounter against Rangers.

DISCLAIMER: The Views, Comments, Opinions, Contributions and Statements made by Readers and Contributors on this platform do not necessarily represent the views or policy of Multimedia Group Limited.
Tags:
Ajax
Mohammed Kudus
UCL