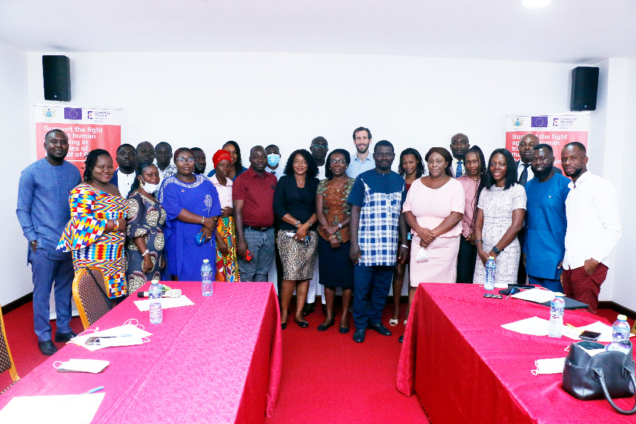 Plans are well ahead to get more African journalists to partake in an advance training on human trafficking and its related issues in Africa and the world at large.

The training which would be funded by the European Union and organized by Expertise France seeks to broaden the knowledge of African journalists in the fight against human trafficking.

This was disclosed by the Project Manager of Expertise France in Ghana, Serge Akpaloo, at a training workshop for 20 selected journalists from Ghana and Nigeria.

Mr Serge Akpaloo noted that the project was important to have journalists lead the fight against human trafficking, hence more journalists from other African countries would be trained in the coming months with funding from the European Union (EU).

He said, journalists from Togo, Burkina Faso, Benin, Guinea and Côte d’Ivoire would be the next to have the advance training in human trafficking and its related issues adding that this will help journalists in Africa to have a united front against the menace.

Mr Akpaloo hopes that with the just ended training, journalists would be able to do more compelling reports on human trafficking and help in the fight against the menace as journalists are in the process of forming a regional network across Africa to help them have a collaborative effort in fighting the canker.

“This project was able to happen with help from the European Union for the first ever advance training for journalists from Ghana and Nigeria and we hope that the journalists will go back and focus on reports on human trafficking,“ Mr Serge Akpaloo said.

Mr Akpaloo also noted that some selected journalists would also be mentored to have provide more adequate and compelling stories on human trafficking.

The facilitator, an international media consultant, Charles Autheman who took the participants through the training noted that there is an increase in human trafficking globally and it is often related to labour exploitation or commercial sex exploitation.

Mr. Autheman said reporting on human trafficking is complex and quite a sensitive topic to work on as it involves working with sources and organized crime, thus the need for journalists to be well equipped to work on the topic effectively to educate the public.

Participants from both countries were excited about the training and pledged to do more compelling stories on the issue.

Expertise France is the French public agency for the design and implementation of international technical cooperation projects. Mandated by partner countries and donors, Expertise France recruits specific experts for each project in order to mobilize know-hows tailored for each mission.

The training was sponsored by the European Union.

DISCLAIMER: The Views, Comments, Opinions, Contributions and Statements made by Readers and Contributors on this platform do not necessarily represent the views or policy of Multimedia Group Limited.
Tags:
European Union
Expertise France
Human trafficking