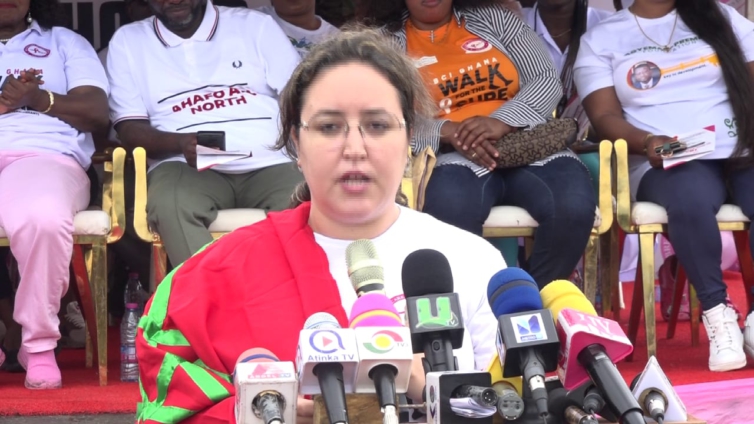 Morocco’s Ambassador to Ghana has pledged her country’s commitment to continue assisting Ghana in its fight against cancer.

Imane Quaadil stated that the embassy is committed to working with organizations, particularly Breast Care International (BCI), to reduce the disease to its bare minimum in the country.

“We’re looking forward to next year’s walk,” she said, and “I pledge the Moroccan embassy’s support and continued presence at BCI events and to the noble courses and actions.”

The Ambassador was speaking at the 10th edition of the BCI Walk for the cure, which was held at Tepa in the Ashanti Region’s Ahafo Ano North District.

Dr. Beatrice Addai Wiafe, President of Breast Care International, stated that more than 2000 Ghanaian women die of breast cancer each year and that there is a need to reverse the trend.

According to her, one of the factors preventing many women from seeking medical treatment and staying at home is stereotyping.

In light of this, she stated that public education is critical in educating people about the importance of knowing that breast cancer is curable and survivable in order to overcome fears and stigma.

Dr. Wiafe-Addai believed the initiative will go a long way toward encouraging people to embrace breast cancer screening and lowering the stigma.

She urged the government to establish social intervention programs aimed at assisting women diagnosed with breast cancer, given the high cost of medication.

“Cancer treatment is very expensive, and we should be there for our women, we should have social interventions [that] will help women who have been diagnosed with this disease, and so we need to look at it critically because sometimes when the woman even needs to go to the hospital every three weeks, there’s no money to do that journey, so we need to have places where the woman can go and access such help,” she said.

Nana Adusei Atwenewaa Ampem, the Tepa Traditional Area’s Chief, urged women to allow their partners to fondle and suck their breasts in order to aid in the early detection and treatment of cancer.

According to him, men have a critical role to play in preventing the disease in their partners, and they should enjoy doing so.

“We men have a role to play in detecting the disease early because we fondle and suck breast every day,” he said.

“I urge you to notify your partner if you feel anything unusual when fondling her breast so that the disease can be detected and treated early. I’ll also beg you, ladies, to let your husbands fondle your breasts. If you are a man and do not enjoy fondling or sucking breasts, please from today, also do it.”

Nana Adusei also urged the public to stop attributing the disease to spirituality and instead seek treatment at health facilities, particularly the Peace and Love Hospital.

While appealing to the government to support the organization’s activities, the Chief pledged to offer a parcel of land to the Peace and Love Hospital to establish a branch in Tepa to aid in the treatment of breast cancer and related diseases.

According to Vivian Gyasi Sarfo, President of the Breast Cancer Survivors Association of Ghana, and her members, breast cancer treatment is very expensive, affecting many of them financially.

As a result, they are pleading with the government to subsidise their medication in order to save more lives.

Thousands of people from various sectors and communities, including the Moroccan Ambassador to Ghana, the Director General of NADMO, the Ahafo Ano North District Chief Executive, health officials, market women, and students, took part in this year’s BCI Walk for the Cure at Tepa in the Ashanti Region.

The event’s theme was “breast cancer won’t stop, so why should we?”

Meanwhile, The NLA Good Causes Foundation also presented a cheque amount of GHS 50,000.00 to support the BCI in their awareness creation campaign.

DISCLAIMER: The Views, Comments, Opinions, Contributions and Statements made by Readers and Contributors on this platform do not necessarily represent the views or policy of Multimedia Group Limited.
Tags:
Breast cancer
Imane Quaadil
Morocco