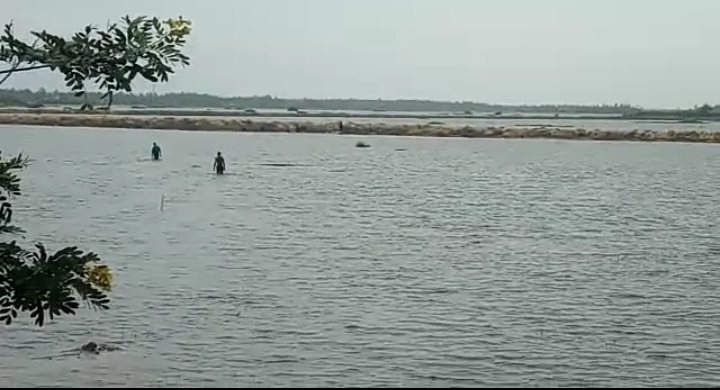 A woman, aged 41, has drowned with three children in a pit dug in the Keta Lagoon at Laklevikope, near Aflao, in the Ketu South Municipality.

The incident happened on Saturday when Madam Yawa Apenu was allegedly fishing with Bridget Amewu, 14, and Daddy Amewu, 10 – her children- and a third child, Sitsofe Ahiawor, 8, who lived with the family.

Mr Atitso Amewu, the widower, who was said to be on the expedition, however, managed to swim to safety.

Some residents, who spoke to the Ghana News Agency (GNA), said they suspected that the pit was dug by the Seven Seas Salt Limited, which had an uncompleted dyke on its concessions in the area.

But the company has denied the claim.

In July, two people reportedly drowned along that stretch of the lagoon, when they attempted to fish.

Mr Victor Ayaku, Assembly member for the area, in an interview with the GNA following that incident said that:

“There’s no form of protection around the dykes, no demarcation and it’s almost like a death trap to unsuspecting residents who might want to go fishing in the lagoon.”

But Mr Adams Mensah, the Public Relations Officer of Seven Seas Salt Limited, said the Company was not to blame last for Saturday’s disaster.

He said the pit was outside the company’s concession and that it was a fish pond belonging to an individual who was not known to the Company.

Expressing his sympathy over the loss of lives, he said that the mining company was ready to support the family of the deceased.

He urged collaboration between them and stakeholders, especially the assembly members in communities where the Company had concessions, to work to prevent such avoidable deaths.

Mr Mensah said though the Company had constructed signposts on danger, which it would start mounting on its concessions from Monday to ward off people and fishers from deep pit areas, it would also do education campaigns.

People, he said, could use sticks to test the depth of the water while fishing to avoid disasters because some individuals had fish ponds created in the lagoon.

Meanwhile, a Police source, which confirmed the incident to the GNA, said the bodies had been deposited at the morgue, while a meeting had been scheduled with the family of the deceased to help in investigations.

DISCLAIMER: The Views, Comments, Opinions, Contributions and Statements made by Readers and Contributors on this platform do not necessarily represent the views or policy of Multimedia Group Limited.
Tags:
Aflao
Keta Lagoon
Ketu South Municipality
Laklevikope