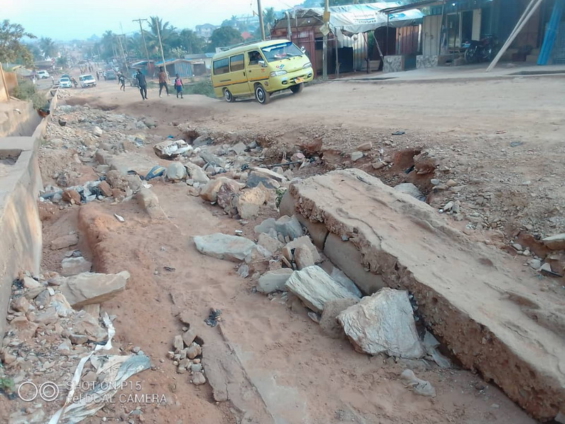 Motorists who ply roads within Olebu, a community in the Sowutuom constituency of the Greater Accra Region, are seething with anger over the poor state of the roads.

According to them, all their money go into servicing their vehicles virtually on a daily basis as a result of the poor roads.

The drivers are not the only group unenthused with the poor roads, they are joined in their anger by residents, who also say many commercial drivers refuse to ply the bad roads resulting in many workers running late for work.

Their journey back home from work is no better.

Apart from the recently constructed and therefore in great shape Pokuase – Awoshie highway, the rest of the roads are in serious disrepair.

Right from Vicolis Junction to Dwenewoho, no stretch of the road is tarred and during the rains, the entire stretch is one of mud.

Indeed during rainy seasons, these drivers and motor cyclists struggle moving to and fro, as the rains create potholes and gullies everywhere. There is no breathing space either in the dry season – dust follows and chokes you all the time till you exit.

Some residents and other road users are actually counting the days to the next general elections – for that when politicians marshal resources to come ‘grade’ the roads – and soon after abandon them when the elections are over.

Baba Yammutu, a Station Master at the Olebu taxi rank, cried out his plea to the government to come to their aid because the roads are really in a deplorable state.

“In fact we are suffering for the road, especially when you come down from Vicolis, near the pharmacy going to Omanjor, we are really suffering. Every three days we have to go for maintenance and now the fuel prices are also killing us. I would blame the MPs, the Government and the Assemblyman for the state of the road. The Assemblyman is trying but he has to try more”, said Baba Yammutu.

“The roads are not good, especially from Olebu to Dwenewoho and Omanjor. Sometimes you can even fall with the passenger (pillion) on the motor. This is because of the muddy or sandy parts on the road. The roads are very bad. We plead with the Government to fix our roads for us”, Samson, a motor rider pleaded.

Abdul Rahman, a taxi driver who has been plying the road for the past seven years also shared his frustrations. “I just fixed my car yesterday and it cost 1,200 cedis. The roads are very bad especially during the rainy seasons. I spend more than the sales I get to repair my car. After every three months, I have to buy ball joint, shaft, and sometimes fix my tyre at Abbosey Okai and it is very expensive.

“I don’t blame the Government so much. The Assemblyman stays around and it his duty to send our pleas but he doesn’t. We are pleading with the Government to fix our roads, but we leave the rest to God.”

The Assemblyman for the community, George Nana Adu Darko popularly known as Ageorgia also expressed concern about the appalling state of the roads.

“This road has been like this since the beginning of the world. Now it is even better. We are in a rural community and for us it is not that bad even though we want it better than it is,” he explained.

He denied the allegations he does not forward the needs of the community to the assembly, saying that even though it is not the duty of an assemblyman to construct roads, he is desirous to see development in the area.

DISCLAIMER: The Views, Comments, Opinions, Contributions and Statements made by Readers and Contributors on this platform do not necessarily represent the views or policy of Multimedia Group Limited.
Tags:
Olebu
Sowutuom