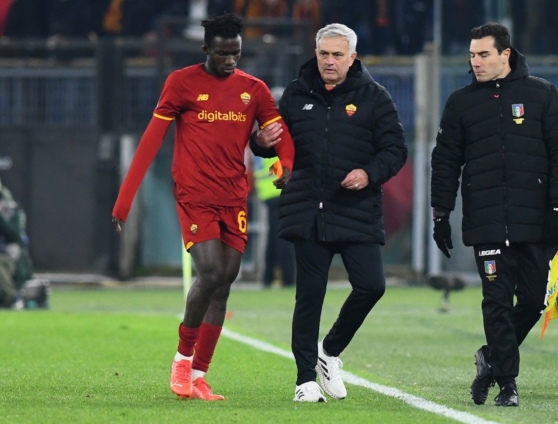 Jose Mourinho has jumped to the defence of AS Roma striker Felix Afena-Gyan who was accused by the media of injuring Georginio Wijnaldum.

The 31-year-old Dutch midfielder joined the Giallorossi earlier this month on loan from Paris Saint-Germain, and Mourinho’s Giallorossi fans couldn’t wait to watch him play. Things have unfortunately taken a turn for the worst and Wijnaldum’s broken leg will likely keep him out of action until after the World Cup in Qatar.

Jose Mourinho came out to shut down the rumours and praised the Ghanaian youngster 🇬🇭👏🏾👏🏾👏🏾 pic.twitter.com/gkl0zsgw6p

La Gazzetta dello Sport claimed today that a training-related collision between Wijnaldum and Afena-Gyan, resulted in the broken leg.

Mourinho addressed Wijnaldum’s injury on his Instagram page and exonerated Afena-Gyan of any wrongdoing.

“Sometimes football can be sh*t. In only 2 weeks, Gini became one of us because of his human qualities (his football qualities we already knew).

“Sadly, In a very unfortunate accident he had a bad injury that will keep him away from playing for a long time.

“But it’s not just football to be sh*t sometimes, people can also be… Those who initiated the rumours that a top kid like Felix could be responsible for what happened are real scum.

“Let’s all be together tonight, we play for Roma, for Wijnaldum and for Afena-Gyan.”

Reports suggest that Roma are waiting for further tests and would like to avoid surgery for Wijnaldum but as things stand the Dutchman is not expected to be fit in time for the World Cup in Qatar.

DISCLAIMER: The Views, Comments, Opinions, Contributions and Statements made by Readers and Contributors on this platform do not necessarily represent the views or policy of Multimedia Group Limited.
Tags:
AS Roma
Felix Afena-Gyan
Jose Mourinho