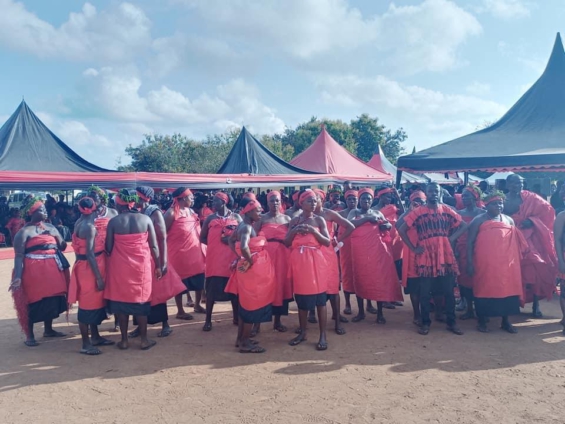 The funeral of the late Abesimhemaa, Nana Yaa Pomaa ended at Abesim near Sunyani over the weekend.

The Paramount Chief of Dormaa and overlord of Abesim, Osagyefo Oseadeeyo Dr. Agyemang-Badu II, joined scores of mourners to give the late queen mother a befitting farewell at the Abesim local Roman School Park.

Other mourners included politicians, former ministers of state, the clergy, and other royals from all walks of life.

The late Nana Pomaa who ascended the Abesim Queenship stool in 1978 occupied the stool for 43 years and she passed on in 2021 after a short illness. She was 66 years.

As tradition and custom demand, the late queen was buried late-night Saturday at the Abesim Royal Mausoleum to join her ancestors after she was laid in state publicly at the Abesim Palace on Friday for the hundreds of mourners to pay their last respect.

Osagyefo Oseadeeyo Dr. Agyemang-Badu II and Odeneho Dr. Akosua Frema Dwaben II, the Paramount Queen-mother of Dormaa performed traditional rites in secret before the body was later put into a casket for burial.

It was however hectic for the heavy police personnel deployed to maintain law and order to control the unusual human and vehicular traffic in the Abesim township.

Traditional warriors, mostly from the Dormaaa Traditional Area, were also not left out of the “Dotoyie” (pre-burial funeral) when they fired sporadic musketries to scare onlookers.

The burial of the late queen would pave the way for the installation of a successor who would then lead to chiefs and people of the area to hold a befitting final funeral rite for the late queen.

The entire pre-burial funeral program which started on Tuesday with a clean-up exercise was a success, and on behalf of the chiefs and people of the Dormaa Traditional Area expressed appreciation to all and sundry who in diverse ways contributed to the success of the program.