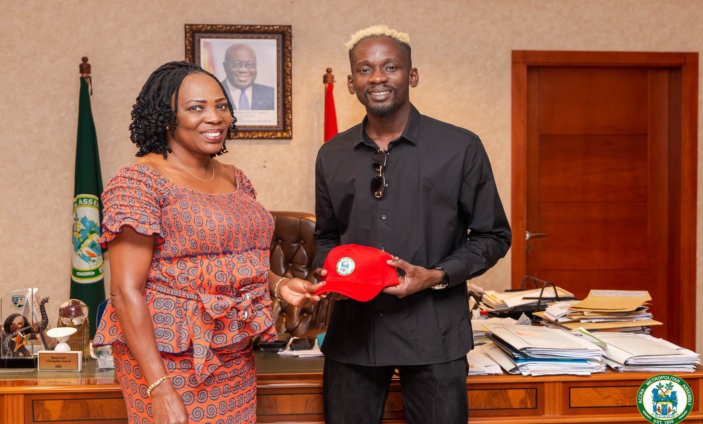 The ‘Leg over’ hitmaker who was accompanied by Daniel Kwame Sarfo an Executive Director of emPawa Africa said as part of betPawa’s Corporate Social Responsibilities(CSR), the company wants to support the city to empower the youth through the development of sports.

He said the company believes that not everyone could be an engineer or musician like himself but some could be boxers or runners, hence the partnership with the Assembly to bring development to the people of Accra through sports.

He noted that as a sports betting and online gaming industry that continues to see massive growth, it was important to demonstrate strong Corporate Social Responsibility (CSR).

“In the past, we have been brainstorming on ways to touch Corporate Social Responsibility (CSR) and promote responsible gaming… We want to do something to develop sports in Ghana hence our recent decision to sponsor the Ghana Premier League,” he said.

He added that his company was looking for projects to align with and commit funds to meet CSR and provide some visibility for its brand in a meaningful way.

He announced plans to support the Assembly to refurbish some boxing gyms in Accra and also reequip them to help promote boxing in the metropolis.

The Mayor of Accra who welcomed the famous Nigerian musician to her office at the city hall lauded the initiative to partner with the city to bring development to its people through sports and reiterated the city’s commitment to empowering the youth in the metropolis.

She also called on the musician to support her women’s empowerment agenda adding that equality for women would benefit generations to come.

DISCLAIMER: The Views, Comments, Opinions, Contributions and Statements made by Readers and Contributors on this platform do not necessarily represent the views or policy of Multimedia Group Limited.
Tags:
Accra mayor
Mr Eazi