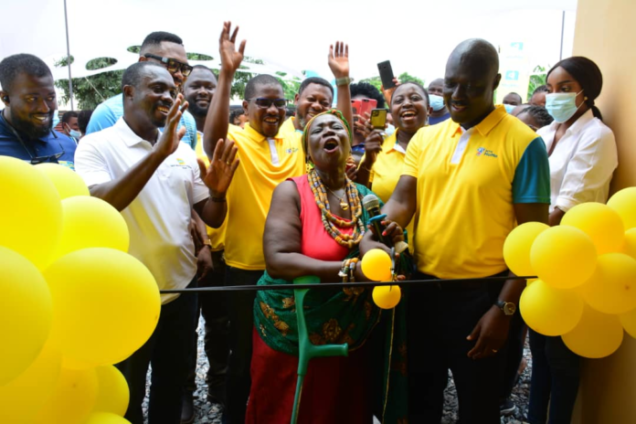 The woman who led the ‘Me nsa aka ooo‘ TV commercial 13 years ago to promote MTN’s Mobile Money (MoMo) has been gifted a two-bedroom house.

MTN Ghana gifted her the house, worth over ¢300,000. It is located at Doboro in the Greater Accra Region.

The woman, Rita Nhyiraba Tetteh, was the lead character in the first MTN Mobile Money television and radio commercial.

In the commercial, she gave a testimony on how she instantly received the money on her mobile wallet when it was sent and shouted in twi, ‘me nsa aka oo‘ as against another character who was asking where the money was – ‘na sika no wo hen.’

The two-bedroom house was built in fulfilment of a promise made to Ms Tetteh two years ago at the MoMo 10th anniversary celebration in 2019.

At an event held at the premises of the house at Doboro, the leadership of MTN Mobile Money Limited handed over the keys of the building to her.

The Chief Executive Officer of MTN Mobile Money Limited, Eli Hini, said the presentation was part of the company’s effort to honour and celebrate all stakeholders who contributed greatly to the MoMo journey.

“In view of the success chalked over the years, Mobile Money decided to honour all stakeholders who played very critical roles in the MoMo journey during our 10th-anniversary celebrations,” Eli Hini said.

DISCLAIMER: The Views, Comments, Opinions, Contributions and Statements made by Readers and Contributors on this platform do not necessarily represent the views or policy of Multimedia Group Limited.
Tags:
MoMo TV commercial
MTN
Rita Nhyiraba Tetteh