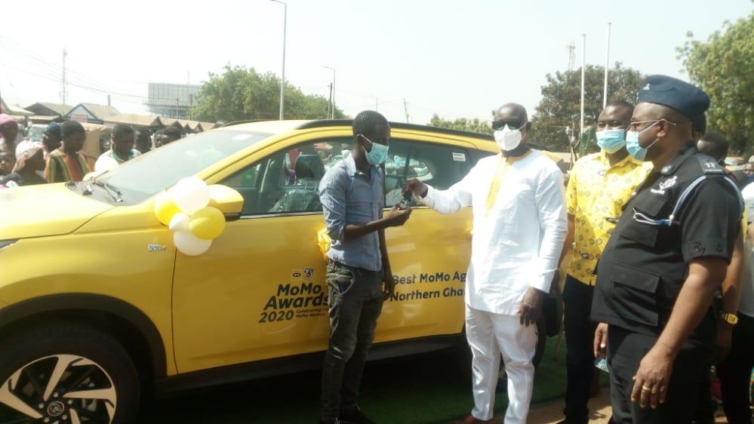 A retail agent for MTN in the Savannah Region, Mr. Haruna Mohammed, has received a mini Toyota Rush from MTN Ghana.

The car is his reward for being the best Mobile Money (MoMo) agent of the Company’s Northern Business District.

The ultimate award was presented to him at the annual awards for MoMo agents and merchants in Tamale in recognition of his hard work and commitment.

The Best Area Account Developer and the second-best MoMo agent received motorbike each as special awards of the year.

The Senior Manager for North General Trade of MTN Ghana, Mr Simon Amoh, said Agents, Merchants and Distributors have been the lifeline to the growth of MoMo services and MTN’s businesses.

He stated selection for the award winners was based on the volume and value of transactions and the adherence to laid down rules and regulations.

He urged the awardees and staff to keep up the good work to ensure delivery of best services to customers, adding that the company would continue to motivate its trading partners for business growth.

Mr Amoh cautioned partners and customers not to disclose their MoMo pin, allow others do transactions on their behalf and avoid discussing wallet details with strangers, because fraudsters keep revising strategies as the company intensifies education and enhance internal security processes.

He advised MoMo agents to call the Police emergency number for protection when they sense danger and ensure they operate within a well-marked location with clear roads, where the police could easily locate them in times of danger.

DISCLAIMER: The Views, Comments, Opinions, Contributions and Statements made by Readers and Contributors on this platform do not necessarily represent the views or policy of Multimedia Group Limited.
Tags:
Mobile Money
MTN