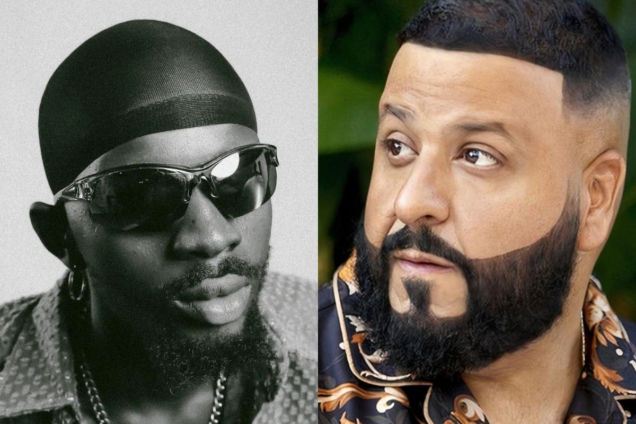 American rapper and producer, DJ Khaled is the most recent internationally-recognised musician to heap praises on Ghanaian act Black Sherif.

The rapper took to his Instagram Stories on Tuesday to share a screenshot of Black Sherif’s recent hit Kwaku The Traveller.

Later in the day, DJ Khaled posted a video of Black Sherif singing the hit Kwaku The Traveller when it was first released.

He called the song “music that touch(sic) your soul.”

DJ Khaled in his post urged Black Sherif to keep going strong and put next to it, a fire emoji.

“So hard,” he commented.

Timbaland, months ago, had already poured accolades on Black Sherif after the Kwaku The Traveller video was released.

He shared a snippet of the video on his page, tagged Black Sherif, and added four fire emojis. “This that vibe, (sic)” he wrote.

‘Kwaku The Traveller’ was officially released on April 15. Since its release, the song produced by Joker Nharnah has been on the apex of major music playlists across the various digital streaming platforms in the world.

Black Sherif garnered over 75 million audio streams with his smash hit single a month after its release.

The ‘Kwaku the Traveller’ hitmaker becomes the first Ghanaian artiste to reach the 100 million streams milestone on Boomplay after having had a phenomenal run since last year.

Born Mohammed Ismail Shariff, the 20-year-old talented artiste released “Money”, “Cry For Me”, and “Destiny” in 2020, which gained him some traction online.

When Black Sherif’s “First Sermon” and “Second Sermon” were released in 2021, they went viral and brought him to the mainstream limelight.

A remix of his “Second Sermon” featuring Burna Boy gave him further reach across Africa and beyond.

Consequently, during Boomplay’s Recap 2021, which highlights stats and insights of music consumption and engagement on the Boomplay platform, Blacko emerged as Ghana’s 2nd Most Streamed Artiste of 2021 and his “First Sermon” and “Second Sermon” were the 1st and 2nd Most Streamed Songs of 2021 in Ghana.

Black Sherif, went on to win the four awards at the 2022 3Music Awards, held in March 2022, including the Boomplay Breakthrough Act of the Year.

At the same event, he debuted a spectacular performance of his hit single, “Kwaku the Traveller”.

Many Ghanaians are seemingly happy for Black Sherif for getting a recognition from DJ Khaled himself.