My issue with IGP is in the past – UK High Commissioner 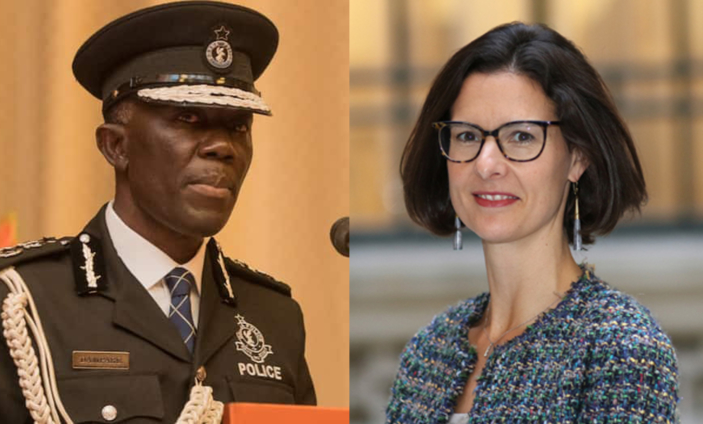 The British High Commissioner to Ghana, Harriet Thompson, has revealed that the purported rift between her and the Inspector General of Police (IGP) Dr. George Akufo-Dampare has been resolved.

“As far as I am concerned it is in the past. It was a misunderstanding…Our relationship is too important for a misunderstanding like that to affect it. I want to reassure people that it has not and it will not,” she stated.

Mrs. Harriet Thompson disclosed this during a yet to be aired interview on The Probe on JoyNews on Sunday.

It would be recalled that on May 17, Mrs. Thompson tweeted, “Oliver Barker-Vormawor, the convener of #FixTheCountry Movement, arrested again, I understand, for a motoring offense on his way to court. I’ll be interested to see where this goes.”

The tweet followed the arrest of Mr. Oliver Barker-Vormawor, a social activist, for breaking traffic regulations.

In response to the tweet, the IGP, George Akufo Dampare issued a four-page letter, the content of which sums up in four Akan words- ‘Di wo fie asɛm’, to wit, “learn to keep within the limits that concerns you.”

With the issue resolved, the UK High Commissioner underscored the importance of the UK’s relationship with Ghana.

According to her, “it is better that it remains that way.”

“The relationship the UK has with the Ghana Police Service is really important. It goes back many years. Recently we have provided training to detectives in the police service, we have been providing training on countering explosive devices and that work absolutely carries on as part of the security dialogue that we have been talking about,” Mrs. Thomson assured.

The Probe airs tonight on the JoyNews channel at 8:00pm.

DISCLAIMER: The Views, Comments, Opinions, Contributions and Statements made by Readers and Contributors on this platform do not necessarily represent the views or policy of Multimedia Group Limited.
Tags:
IGP George Akuffo Dampare
UK High Commissioner to Ghana