My relationship with Stonebwoy is not as cordial - Samini - MyJoyOnline.com

My relationship with Stonebwoy is not as cordial – Samini 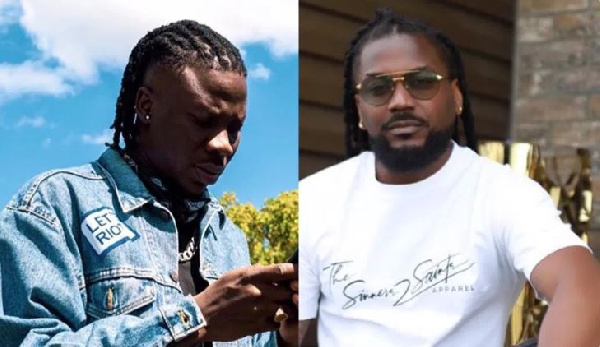 Reggae/Dancehall artiste, Emmanuel Andrews, popularly known as Samini, has disclosed that his relationship with colleague singer, Stonebwoy is not as cordial as it used to be.

The dancehall artiste has, in the past, had some social media altercations with his former signee, Stonebwoy, over several issues.

Confirming reports circulating in the media, Samini told George Quaye on Showbiz A to Z Saturday that he and Stonebwoy weren’t in the best place as a family anymore.

“I can honestly say on Joy FM that I am too old to sit here and lie or throw dust in people’s eyes or fake. My younger brother and I aren’t as nice as we used to be or as I used to know him because of certain occurrences that I did not expect during or along the line in our careers when he had become independent,” he said.

The ‘Obaa’ hitmaker had earlier shared how he met Stonebwoy back in the day and the soft spot he had for him.

According to the ‘Obra’ singer, Stonebwoy was introduced to him by his dancers when he expressed an interest in meeting him.

“It started from a soft spot. I had met a lad that had all it took to blow. He was brought to me backstage by my dancers, we vibed and then he said that he lives in Ashaiman and because of his and leg, his dad doesn’t like it when he goes out and returns late, but he will like to hang out in Dansoman with us.

“So if I will take him home so that his family can believe he comes to me and knows me. I drove to Ashaiman, met the family, and told them if he wasn’t with them, he was with me in Dansoman. His mom and dad took me as their son, so also took him as a brother.”

However, as it exists in every family, there were some cracks in the relationship between the two artistes.

Samini explained that the intention of his label, Samini Music then, was to build Stonebwoy to a certain point and allow him to be on his own when he could fend for himself.

He further added that their split, although amicable, had some issues he wasn’t ready to talk about.

“I would say it was amicable and professional. I would not go into the nitty-gritty of why we parted ways, how and what influenced it. But, yes, there were internal problems; I believe he had internal problems, with a few issues here and there.

“I have an encounter that happened that maybe one day if he wants to talk about it or tell Ghanaians what he did, he would. So that was the breaking point for me as a bigger brother who was observing and feeling a certain way when making a certain move. So we had to part ways nicely so that we can always be in a good relationship.”

Samini said Stonebwoy had made attempts to reach out to him and settle issues.