‘My wife can never call my name in public’ 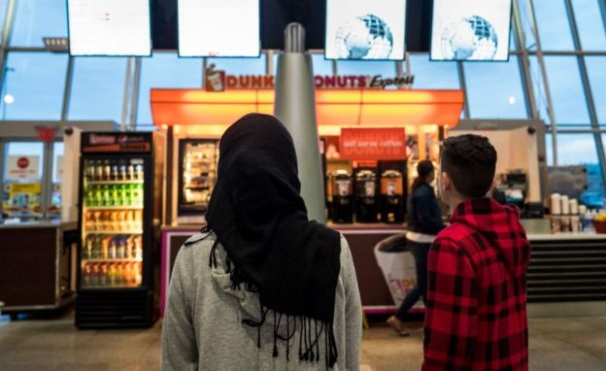 Imagine you're at a busy airport, somewhere in Europe or the US. You're meeting your wife (let's call her Layla) after work and flying off for a mini-break. She's running late, so you sit down in a coffee shop to wait. Soon you're lost in thought, so you don't see your beloved waving from across the terminal. How can she get your attention? Shouting your name would work. But if she does that, bystanders will panic. Security will circle. Your law-abiding missus could be taken to a stark side-room and interrogated for hours.

Your wife is a practising Muslim, and your name is Jihad.

What's life like when your loving parents saddle you with a name that provokes shock, rudeness or awkward jokes across much of the Western world?

The BBC asked three men named Jihad – a doctor from Chicago, a famous Syrian actor, and a young engineer from the Palestinian territories building a life in London.

In Arabic-speaking countries, Jihad – sometimes spelled Jehad – is a perfectly normal thing to call your baby. The word means "a struggle for a noble cause". And in the days before 9/11 and the War on Terror linked it to mass murder in the public imagination, it functioned just like any other name.

Abdo was ordered to give a TV interview in support of President Assad. He refused, and fled the country.

The US was his sanctuary – but his name quickly proved a liability.

"I raced to America in October 2011," Abdo explains by phone from Paris, on a break from filming the US comedy-drama Patriot. "In no time I was introducing myself to people and seeing this… reaction…"

"Especially in the Midwest, when they heard my name was Jihad the first thing that appeared to their minds was the image of suicide bombers, and the jihadists that attack the army in Afghanistan or Iraq."

Abdo, whose most popular TV show had an audience of 50 million, simply couldn't catch a break in Los Angeles. He suffered through 100 failed auditions and scraped by delivering pizza for Domino's.

He realised that to keep his career, he would have to lose his name. 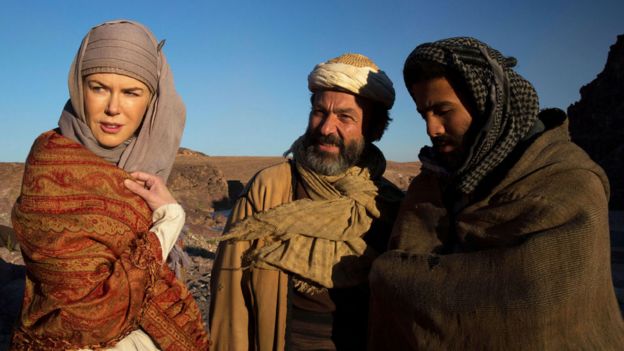 "I just imagine someone with the opposite thing in my country, with a name that we fear. He won't be able to make it big in the entertainment business," he explains.

"I consider myself an open-minded guy, and my wife as well. Humbly speaking, we don't care about having this name or that name. What we care about is our mission in the world, our ethics and our achievements."

He considered Jude, but settled on the name Jay – simple, innocuous – American.

Things changed overnight, "because Jay for them is a lovely guy – it brings to them Jay Leno or… lovely people – people they are comfortable with. It doesn't create any 'sensitivity', let's say."

His family think it's funny, he says.

"I don't want to have problems because of my name when my mind is totally different – and my heart." 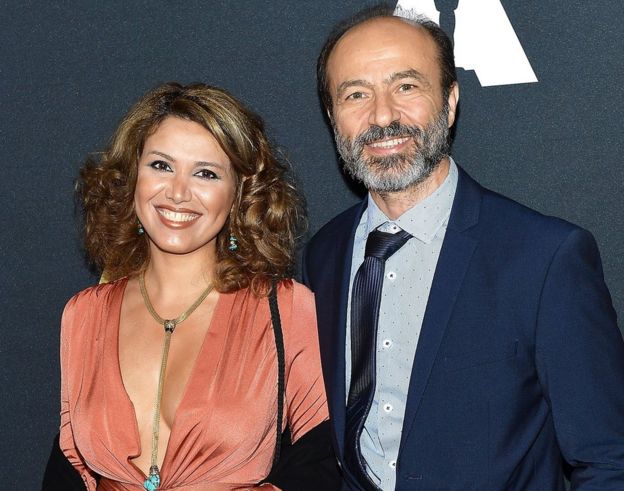 Image captionJay and his wife, artist Fadia Afashe, decided his name change was a sacrifice worth making

Abdo, 55, still uses his original name in Syria and the wider Middle East. And some US friends have rejected the rebranding.

"They said, 'Can I keep calling you Jihad? Because I hate this misunderstanding about anything outside America.'"

'If eight-year-olds can say it…'

That's a philosophy Jihad Shoshara, 49, might well appreciate. He's lived in Chicago all his life, and works as a senior paediatrician – a children's doctor.

Born to a Mexican-American mother and a father from Damascus, he was teased as a child for his "weird" name.

"In Syria and Lebanon, and the Levant in general… it's not like Jacob or something where you kind of hear it every fourth or fifth person, but it's not uncommon by any means," he explains. "It's also unisex. I've met women named Jihad. And it's not even explicitly Islamic, so there are Christians named Jihad as well."

He made the same choice as his actor namesake aged 12 or 13. 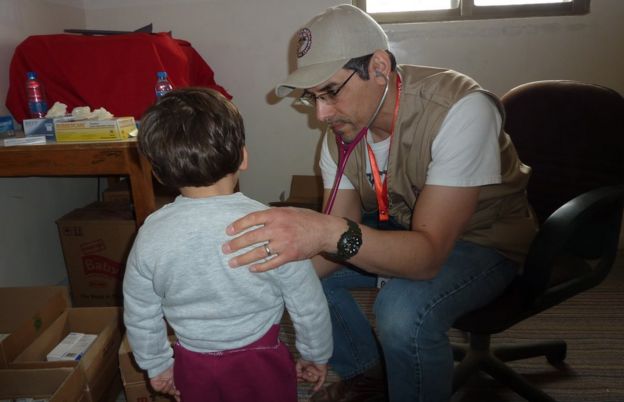 "Going through school, high school and even college, I went by Jay," he says. "I wouldn't hide my real name, but it was just easier to go under the radar and not have to deal with the difficulties."

He remembers very specifically when and why he went back to using Jihad.

"I had just graduated from university, and I had a year off in-between college and going to medical school. I spent the summer as a camp counsellor for underserved youth. And so I went to this camp in rural Wisconsin the day after I graduated. I walked in and introduced myself to the staff, the kids…

Nowadays, he says, "it's a great conversation-starter!"

Though their reasons differ, both Jihads agree they wouldn't give a child of their own the name.

"Superficially no, for the reason that in Muslim tradition, 'Jnr' is not really a thing," the doctor muses.

"Absolutely not," declares the actor.

While Jihad Abdo doesn't consider himself religious, Jihad Shoshara says he tries to be an observant Muslim. But time is short between his doctors' practice and his humanitarian work with the Syrian American Medical Society, which includes relief missions to Jordan to treat Syrian refugees. 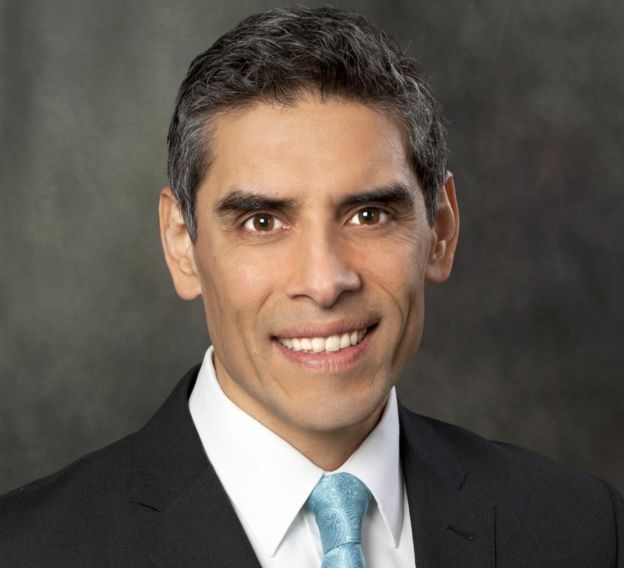 "I try to be observant. So I identify as Muslim. Do I hit all my prayers? No!" he laughs.

The youngest man the BBC spoke to – Jehad Fadda, 32, feels his name has complicated his relationship with religion, because of the assumptions people make.

"I'm not a very religious person, and for me it's a question I need to answer: Where do I want to be on the scale of things? I know religion has a part to play in my life but I'm still coming to terms with where to place it," he ponders.

"In front of people, it feels like I don't get a say in my personal choices. 'So you don't drink because you're Muslim.' Ok I don't drink, yeah, but it's not necessarily because I'm a Muslim – maybe I have other reasons."

Originally from Nablus in the occupied West Bank, Jehad came to the UK seven years ago to study for his second degree – in telecoms engineering, at Newcastle. He is proud to have been named after his grandfather, and when the question "to be Jehad, or not to be…?" came up, chose to keep the name. 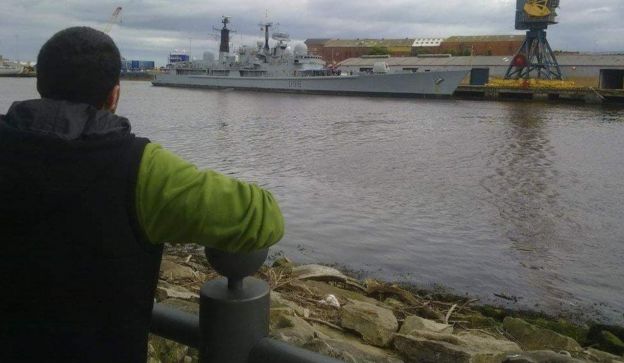 Image captionJehad Fadda says he was named after his grandfather, so his name has sentimental value

Like many London men in their 30s, Jehad sports a full beard – a fashion choice spawned by the city's hipsters. Some would say that's feeding the trolls, I suggest.

The question draws a chuckle. "It's ironic because it's a stupid idea – no-one supports it in my family!

"If you're Muslim and you look at my beard, you'll know this is not a Muslim beard because Muslim beards don't allow a moustache. It's something to look out for! It's viewed as unhygienic."

Airports can be stressful places for Muslim passengers, but Jehad counts himself among the lucky ones.

"Nothing dramatic has ever happened," he reflects, "but being randomly selected not-so-randomly is normal."

He avoids speaking Arabic in airport terminals, and thinks the fact his wife doesn't wear a headscarf has made things easier for them.

What about the (hypothetical) scenario we started with – does he worry about that?

"Interestingly enough, if I lose my wife somewhere, she will never shout my name out loud. That applies everywhere." There's a smile in Jehad's voice again.

So if Mrs Fadda needs to summon her husband in a public place, what would she shout?

"She uses a nickname!"

"Jhu-Jhu! I don't think we've ever written it down…" He laughs fondly. "I'm a 6-foot guy with a beard, and someone calls me Jhu-Jhu!"