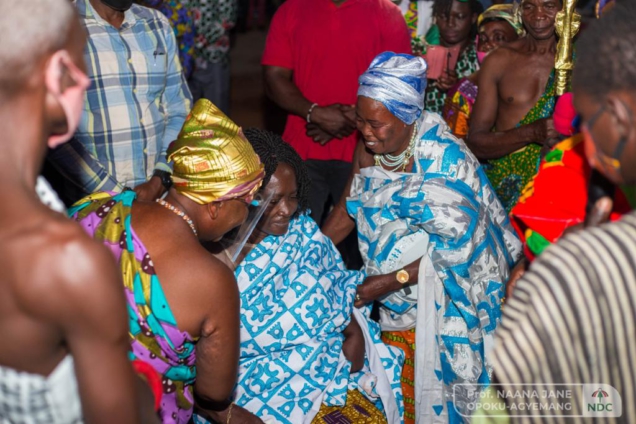 The chiefs and people of Yankye Traditional Area in the Asunafo South District of the Ahafo region have enstooled the vice-presidential candidate of the National Democratic Congress (NDC), Prof Naana Jane Opoku-Agyemang, as the Nkosuohemaa (Development Queen) of the community.

According to the chiefs, her enstoolment, with the title, Naana Agyemang Opambour I, is in recognition of her illustrious contributions to national development. The NDC running mate is also being recognized by leaders of the traditional area because they consider her as a role model to the youth, especially girls in the region.

The installation ceremony, along with other notable events in Kenyase No.2, Asibrem and Kwaku Nyuah, climaxed the NDC running mate’s maiden visit to the Ahafo region, following her selection as running mate to President John Dramani Mahama.

During her tour of the five regions, the vice presidential candidate received numerous concerns from Ghanaians regarding economic difficulties, poor governance, and a decline in the state of social and infrastructure development.

The running mate observed that the widespread dissatisfaction with the performance of the NPP administration was indicative of the despair that Ghanaians faced, and urged the people to vote massively for the NDC in the upcoming general elections.

She noted that a future NDC government would restore hope and roll out policies and programmes which would ensure Ghanaians live in a safe, progressive and prosperous nation with equal opportunities for all, regardless of ethnicity, religion, or political ideology.

In thanking the chiefs and people of the regions for the warm reception she was accorded, Prof Opoku-Agyemang highlighted a number of NDC-initiated infrastructure projects that have been abandoned by the current government, pledging that the next NDC administration would ensure their completion.