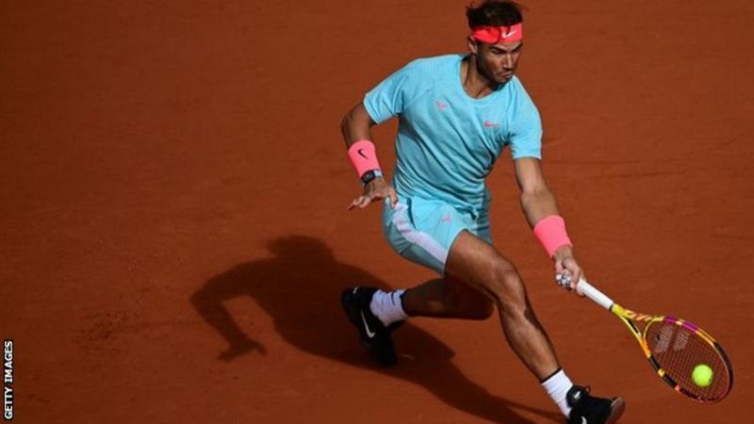 Nadal is looking to win a 13th French Open title

Korda said in the build-up that Nadal was his “idol” but the 20-year-old struggled to match the clay-court specialist on Court Philippe Chatrier.

He will face the winner of Alexander Zverev versus Jannik Sinner next.

“Sebastian will have a really bright future, such a great player and only 20 years old,” said 34-year-old Nadal, of a player who calls him an inspiration.

“It is a real honour. All of our generation try hard to be passionate, play every single day at our best, and if that is an inspiration for the younger generation, that is good.”

Korda, whose dad Petr was the 1998 Australian Open champion and reached the final in Paris in 1992, was the youngest American man to reach this stage at Roland Garros since 19-year-old Michael Chang in 1991.

He grew up watching video tapes of the Spaniard and even named his cat after the 19-time Grand Slam champion.

It promised to be the perfect start for the French Open debutant, who twice had break points in a nine-minute opening game.

But the world number 213 failed to convert as a ruthless Nadal held and then won the following four games on his way to clinching the opening set in 40 minutes.

He eased to the second set in blustery conditions in Paris, before Korda broke early in the third with a combination of fierce backhands.

But Nadal, who is yet to drop a set this tournament, hit back by taking the next five games in a row to win in one hour and 55 minutes.

DISCLAIMER: The Views, Comments, Opinions, Contributions and Statements made by Readers and Contributors on this platform do not necessarily represent the views or policy of Multimedia Group Limited.
Tags:
French Open
Rafael Nadal
Tennis