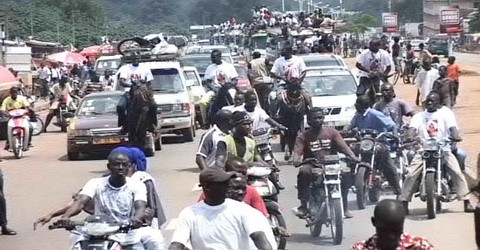 Large crowds of NDC supporters and sympathizers that came out to meet Nana Konadu, the former First Lady, on the last lap of her ‘Thank You’ tour in the Northern and Upper Regions, demonstrated the phenomenal support the former first family wields among the people at the grassroots.

Venting their displeasure at the results of the voting at the Sunyani Congress, the supporters warned the government, NDC executives and delegates who compromised themselves by yielding to pay-outs and intimidations during the Congress that the Party stood to lose the 2012 elections if the Castle continued to pursue its agenda to push aside the Rawlingses.

As proof of their displeasure at the state of affairs in the Party, the people of Sanarigu and Nyohani nearly prevented the NDC supporters that followed Nana Konadu from entering their towns. It was only when they learned that it was Nana Konadu who was on her ‘Thank You’ tour that they gave up their opposition and joined the crowd to cheer the former First Lady. This lent credence to the assertion in some quarters that the Party is treading on dangerous ground by attempting to sideline the Rawlinges.

The events in Sanarigu and Nyohani portend trouble for the Party as the two towns in particular have a place in Ghana’s electoral history as ‘Goldmines’ for the NDC. The electorate has consistently voted almost hundred per cent in favor of the Party basically due to the admiration the people have for its Founder, President Rawlings and his wife, Nana Konadu, for always standing for justice and identifying themselves with the poor in country.

However, this time round, but for the presence, of Nana Konadu, the people would have prevented the NDC from entering their towns, vowing that ‘No Rawlings and Nana Konadu, No Vote for NDC’. They also swore that they would not allow the Party to hold any campaigns or activities there unless the Rawlingses were involved.

It can therefore be surmised that danger looms for NDC in 2012 if the Rawlingses refuse to campaign for the Party.

In the Northern Regional capital, Tamale, Nana Konadu’s entry saw an unprecedented rush of what can poetically be described as a sea of people welcoming her as an arrival of ‘Hope’ for them. Hundreds of thousands of supporters and sympathizers besieged every venue the former First Lady visited and cheered wildly and called to her,’Mama, Mama do not abandon us’, clearly giving her arrival the pomp befitting an icon.

The scene was characterized by both the youth and elderly, clad in NDC paraphernalia and Nana Konadu T’Shirts with ‘Be Bold’ printed on them trekking to the venue. Horses and motor-bikes were not spared inscriptions in support of Nana Konadu. In addition, over 20 buses and a fleet of cars tooted their horns in picnic-style, giving color to the event.

Indisputably, this provided a clue that the Rawlinges are still a force to reckon with, if NDC is bent on winning the 2012 elections to retain the Party in power to achieve its “Better Ghana” agenda.
Some analysts have described the reception Nana Konadu received as the strongest protest by the Party’s followers against the Executives after they had manipulated and intimidated delegates to influence the voting at the Sunyani congress of the Party to elect a flagbearer.

As has been published by most Ghanaian media houses, the enthusiastic responds the former first lady received on her ‘Thank You’ tour across the country has lent credence to the views expressed before, during and after the Sunyani Congress that the government and executives of the NDC compromised the party delegates, ministers and government officials to influence the result of the voting.

Nana Konadu who was expected to hit at the government hard on the issue of how delegates and her supporters were intimidated and the cruel attack to prevent her from speaking at hall in Cape Coast through orchestration by some NDC Executive members, rather chose to calm her supporters and any disillusioned members of the party down by calling on all to turn out in their numbers to register when the new voters registration begins.

The former first Lady also stressed the importance of the NDC and the government upholding the values and core principles of the Party, emphasizing the Party’s maxim of Probity and accountability.
According to her it was the Party’s values and principles that have always attracted the people of this country, resulting in it being voted back into government.

Nana wondered why the leadership and certain elements in the Party would want to destroy the very important values enshrined in its Manifesto to put the NDC in danger of being ousted from power.
She stated that the NDC had won power in the past and present because “we had stayed united since its formation as against the current trend”.

She debunked as lies the government’s claim that it had paid the 31st December Women’s Movement $5 million to rehabilitate the Nsawam Cannery and constructing the Rawlingses family burnt Ridge residence to lintel level.

The former First Lady called on all Party faithful, irrespective of where they find themselves, to rise up and demand from the leadership those values and principles of the Party that have held it together for the betterment of the nation. See photos in our gallery.