National Cathedral: Chief Imam only employing sophistry, his donation has nothing to do with peaceful co-existence – Harruna Attah 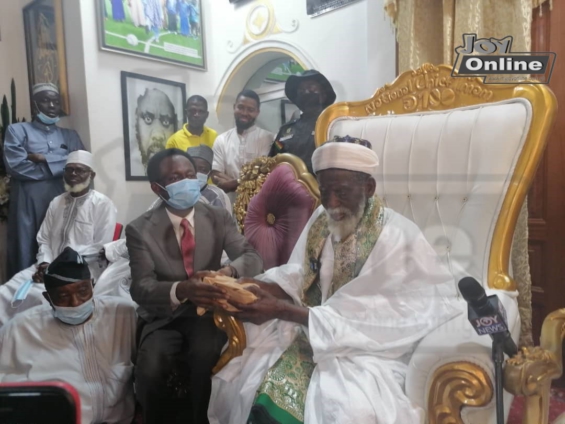 A former Ambassador to Namibia has reiterated his stance that the National Chief Imam donating ¢50,000 towards National Cathedral construction has nothing to do with peaceful coexistence between Muslims and Christians.

Abdul Rahman Harruna Attah said Sheikh Osman Nuhu Sharubutu “in polite terms is employing sophistry because since when haven’t we had peaceful coexistence?

He told Accra-based Citi FM that, “Nana Akufo-Addo had said that he had pledged to his God that should he win an election he will build a cathedral to his God and that has nothing to do with peaceful coexistence between Christians and Muslims.”

Last Friday, the Chief Imam contributed ¢50,000 towards the Cathedral construction, saying he is hopeful the money will aid the speedy construction of the national edifice.

The Chairman of the Board of Trustees of the National Cathedral, Apostle Opoku Onyinah, was excited about the rare move by the Chief Imam.

This donation has been criticised by many Ghanaians after the Finance Minister during the Budget Review called on the citizenry to donate ¢100 a month towards the over $100 million project.

It has divided the populace, with many arguing that the government must focus on important projects that the Cathedral is not part of.

On his part, the veteran journalist said it was unfortunate that the National Chief Imam was supporting a project aimed at “enhancing mass standing within the Christian community.”

“If Muslims cannot see it from that angle and we try to make excuses for what should not be done, then it is up to them,” Mr Atta added.

However, the spokesperson for the National Chief Imam, Sheikh Aremeyaw Shaibu, has justified the decision for the donation.

According to him, it is a “symbolic gesture” aimed at fostering a peaceful co-existence between Muslims and Christians in the country.

He explained that “The spirit about the gesture is to deepen a harmonious relationship between Muslims as a distinct identified community. The Chief Imam has been doing things that are revolutionary in their significance.

“In a revolutionary manner, he is trying to move our mind from the tendency to see each other [Muslims and Christians] as enemies and to remove all traces of hatred.”

DISCLAIMER: The Views, Comments, Opinions, Contributions and Statements made by Readers and Contributors on this platform do not necessarily represent the views or policy of Multimedia Group Limited.
Tags:
Abdul Rahman Harruna-Attah
national cathedral
Sheikh Osman Nuhu Sharubutu