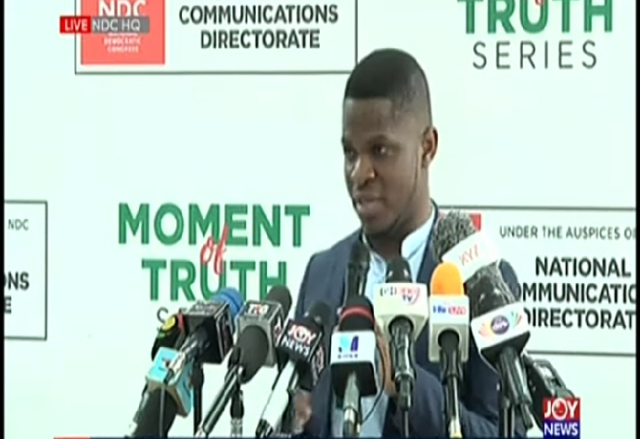 The opposition NDC is demanding the immediate dissolution of the Board of Public Procurement Authority (PPA).

At a press conference Wednesday, Communication Officer of the party argued that the board in spite of knowing that a suspended CEO of the Authority, Mr. Adjenim Boateng Adjei, owned Talent Discovery Limited, went ahead to approve about 14 contracts to the company.

Sammy Gyamfi believes the continuous stay of the board in office could influence investigations into allegations contained in the ‘Contract for sale’ documentary.

Mr. Gyemfi believes, the board, which was cited in the investigation, can forge minutes and alter relevant documents.

“We say so because, it was the PPA Board, which despite knowing that Mr. A.B Adjei is a shareholder of TDL, went ahead to approve the award of as many as 14 contracts to the company under restricted tender in flagrant disregard for the Public Procurement Law and in contravention of all acceptable principles of fairness and openness,” Mr. Gyamfi said at Wednesday’s press conference.

The press conference follows investigations by freelance journalist, Manasseh Azure Awuni, which revealed that TDL, a company incorporated in June 2017, won a number of government contracts through restrictive tendering at the time he was the PPA boss.

The investigative piece which aired on Joy News showed further that of the two directors and shareholders of TDL, one is the CEO of the PPA, Adjenim Boateng Adjei.

The President subsequently directed the Commission on Human Rights and Administrative Justice (CHRAJ), and Office of the Special Prosecutor, to investigate allegations of conflict of interest leveled against Mr. Adjenim Boateng Adjei.

The NDC holds that this is not enough.

According to them “the suspension of the CEO of PPA is meaningless unless it is linked to the immediate dissolution of the PPA Board.”

The Board failed “to observe the provisions of the Public Procurement Law and the rules against conflict of interest.” Which failure, they said, was to aid and abet “the corrupt activities of Mr. AB Adjei and his TDL.”

Beyond the dissolution of PPA board, the party also called for the suspension of ministers whose ministries had contracts with TDL.

“We wish to ask why the Ministers and relevant officers in charge of procurement in the Ministries of Works and Housing, Roads and Highways, Education, Special Development Initiative, and the Heads of COCOBOD, GWCL, BOG, etc. are still at post.

“The NDC holds the view, that all Ministers and state actors who in one way or the other initiated, facilitated or participated in the award of contracts to TDL and the subsequent sale of those contracts to other companies must be suspended forthwith,” the statement urged.