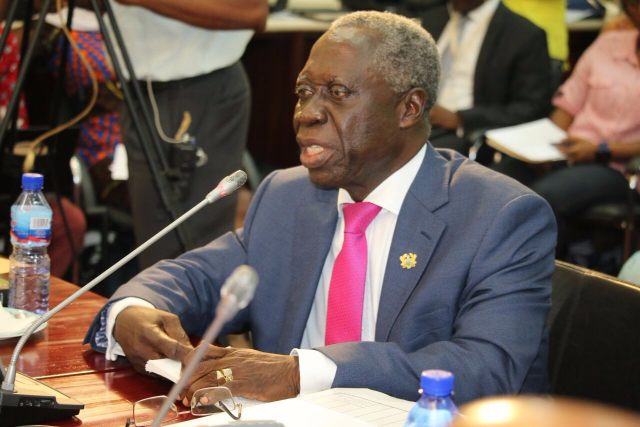 The National Democratic Congress (NDC) has called on President Akufo-Addo to order the arrest and prosecution of the Senior Minister, Yaw Osafo Maafo with immediate effect.

Addressing the media Monday, the opposition party alleged that Mr Osafo Maafo breached the Public Procurement Act (PPA) for allegedly paying Ghâ‚µ4,869,421.87 to Kroll Associates for a contract awarded in September 2017 with the effective date of February 13, 2017.

“President Akuffo Addo must demonstrate that no one is above the laws of Ghana including Mr Yaw Osafo Maafo,” said Johnson Asiedu Nketiah, NDC General Secretary at the press conference.

“The Attorney-General, Miss Gloria Afua Akuffo has put before the courts, some appointees of the previous NDC administration for allegedly breaching the Public Procurement Act, we wonder why the Attorney-General is not showing the same interest in having Mr Yaw Osafo Maafo arrested and charged,” he added.

The Auditor-General, Daniel Yaw Domelevo on November 5, 2019, revealed on Joy FM’s Super Morning Show that the Senior Minister’s reply to his queries over a government contract with Kroll Associates UK to provide consultancy services was unsatisfactory.

He said Mr Osafo Maafo had 60 days to go to court to seek an order setting aside his surcharge.

Mr Dumelovo demanded proof of work done by Kroll Associates and was not satisfied because there was no evidence of work being done but all Mr Osafo Maafo was providing was assurances.

The NDC also claimed that the Auditor-General, through his diligence identified, the “corrupt” acts of the Senior Minister and has ever since been harassed for it.

According to them, the “hostile victimisation” act by the Akufo-Addo government toward Mr Dumelovo is to attempt to “gag him and subsequently remove him from office because of his uncompromising stance in the fight against corruption.”

They further noted that government should applaud the Auditor-General for courageously stepping out to demand accountability instead of frustrating him.